NZD/USD has been quite bearish with the momentum recently which suddenly got certain bullish pressure yesterday which is expected to lead to a short-term retracement towards the 0.68-0.69 area in the coming days.

NZD has been quite positive with the recent economic report of FPI increasing from 0.0% to 0.5% which helped the currency to gain momentum against USD in the process. Though USD has been struggling to sustain the momentum due to the recent worse NFP report and ongoing Trade Wars.

On the USD side, the recent published high impact economic reports were quite mixed and were not enough to support the sustainability of the bearish pressure in the pair. Today, USD Import Price report is going to be published which is expected to decrease to 0.1% from the previous value of 0.6%, Prelim UoM Consumer Sentiment is expected to slightly decrease to 98.1 from the previous figure of 98.2 and Revised UoM Inflation Expectations report is at 3.0% where no forecast has been made on this so far.

Now let us look at the technical side. The price has been quite volatile with the bearish pressure recently which did lead to break below 0.68 with a daily close. As of the recent Bullish Divergence in place, the price has already reacted to it well and is expected to push again towards the resistance area of 0.68-0.69 before showing further bearish pressure in the future. As the price remains below the 0.68-0.69 area, the bearish bias is expected to continue. 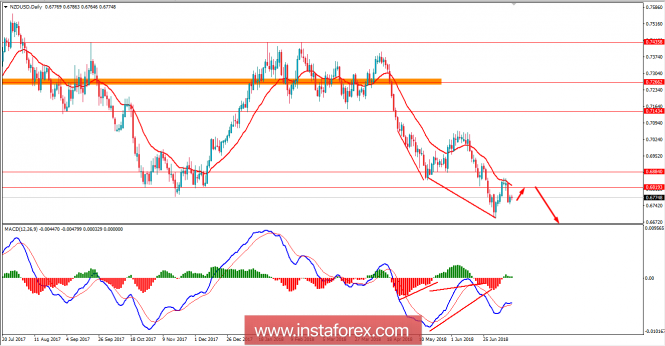