USD/CAD has been quite impulsive with the bullish gains recently after breaking above the 1.3120 area with a daily close. Despite the recent rate hike by the Bank of Canada, CAD failed to gained momentum over USD that might lead to further bullish gains.

Yesterday, the Bank of Canada’s policy statement and overnight rate report was published. The regulator increased the key policy rate to 1.50% from the 1.25% as expected. After certain volatility during the event, CAD lost momentum against USD leading to a bullish daily close above 1.3120 area. Citing BoC officials at the press conference, the central bank has been quite positive about economic growth. On the back of growing tensions due to the trade war between the US and Canada, export sales are being affected that led to a shift in trading sentiment despite the rate hike.

On the USD side, the economic reports published recently were quite positive and helped USD to sustain the bullish momentum in the process. However, the trade war might also undermine USD in the coming days. Today, US CPI and Core CPI reports are going to be published which is expected to be unchanged at 0.2%, Unemployment Claims are expected to decrease to 226k from the previous figure of 231k, and Natural Gas Storage is expected to decrease to 55B from the previous figure of 78B.

As for the current scenario, economic forecasts are quite mixed for the US reports, so such expecftations are going to inject certain volatility in trading. Though the Bank of Canada has been quite optimistic about economic prospects on the grounds of the recent economic reports, analysts expect some correction of USD/CAD. To sum up, USD is expected to gain certain momentum over CAD in the process.

Now let us look at the technical view. The price has been quite impulsive with the bullish gains yesterday that led to a daily close above 1.3120 area but today CAD is struggling for gains. As the price broke above the 1.3120 along with dynamic levels of 20 EMA, Tenkan and Kijun line the price is expected to head higher with a target towards 1.34 resistance area in the future. As the price remains above 1.3050 area, the bullish bias is expected to continue further. 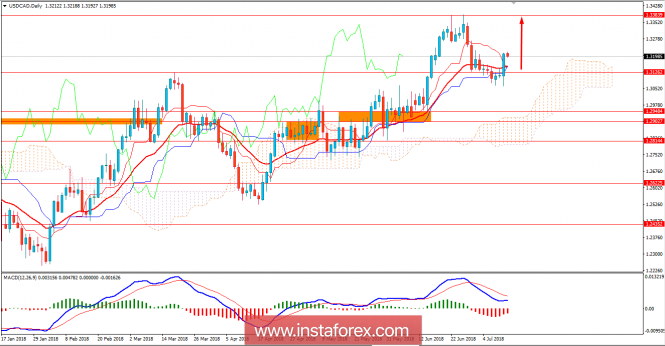