Fundamental Analysis of USD/CAD for July 4, 2018

USD/CAD is currently residing at the edge of 1.3120 support area from where it is expected to push higher with a target towards 1.34 area in the coming days. USD has been the dominant currency over CAD since the rate hike but recent CAD positive economic reports during the Trade War tension did provide some room for the bears to create certain pullbacks in the process.

As of the current scenario, the pair is expected to be very volatile and corrective till this weekly candle close as high impact economic reports are expected to inject uncertainty in the pair as per Trade War situation is still present. To sum up, USD is expected to have an upper hand over CAD in the process.

Now let us look at the technical view. The price is currently retesting the 1.3120 resistance area as support from where the price is expected to push higher with a target towards 1.3400 area in the future. The price has also formed a Bullish Continuation Divergence in the process which is expected to add further accuracy and momentum for the upcoming bullish pressure in the pair. As the price remains above 1.3120 area with a daily close, the bullish bias is expected to continue. 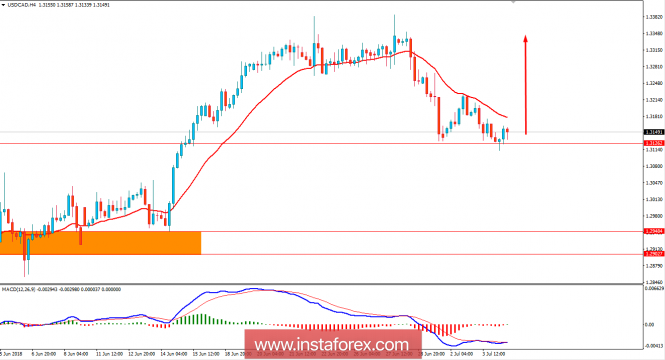