Fundamental Analysis of USD/CHF for July 4, 2018

USD/CHF has been quite volatile and corrective below 0.9980 to 1.0035 area from where it is still expected to slip lower towards 0.9850 and later towards 0.97 area. USD has been the dominating currency in the pair amid the recent rate hike by the US Fed. However, as trade jitters are increasing, USD is expected to lose some momentum in the process.

As for the current scenario, CHF has been quite mixed amid the recent economic reports whereas USD has been consistently firm which may lead to further bullish momentum in the pair. However, pending macroeconomic reports from the US have sour outlook, so USD may look quite weak ahead of the news. Besides, worse-than-expected result may lead to weakness of USD against CHF.

Now let us look at the technical view. The price is currently residing above the dynamic level of 20 EMA with certain bullish momentum. As the price remains below 0.9980 to 1.0035 area with a daily close, the bearish bias is expected to continue to push the price lower with a target towards 0.9850 and later towards 0.97 area. Though the Bearish Regular Divergence cannot be spotted clearly at the moment, the current corrective phase is expected to push the price lower in the coming days. 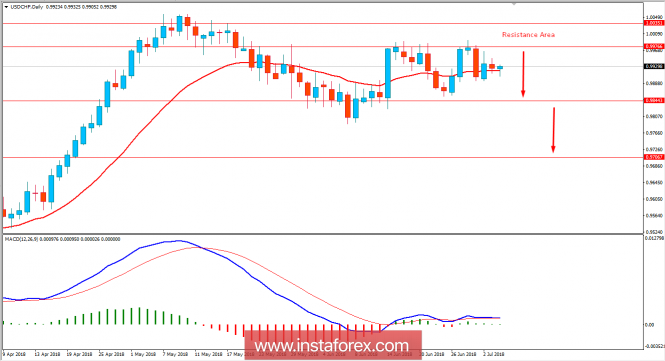