USD/JPY has been quite impulsive with the bearish gains since it bounced off the 113.20 area with a daily close last week. Yesterday the price action was quite indecisive having no definite momentum on either side of the market. Despite the recent positive economic reports, USD is still struggling to sustain the momentum it had over JPY earlier.

As of the current scenario, as per Trade War tensions between US and Japan, certain volatility is quite obvious but USD struggling to gain momentum in the process with an impulsive sell-off did shake the market sentiment for a bit. Though the bearish pressure is starting to look weak currently but ahead of the upcoming high impact economic reports, USD may gain momentum after a bit further dip downward in the process.

Now let us look at the technical view. The price is currently quite indecisive residing above the support area of 110.50 with a daily close. Though the price has breached below the dynamic level of support in the process but certain bearish momentum for retest at 110.50 is expected before the price push higher again with target towards 113.20 in the coming days. As the price remains above the support zone of 108.50-110.50 area, the bullish bias is expected to continue further. 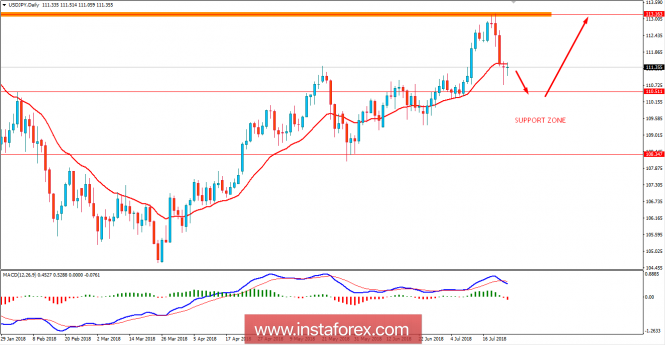