GBP / USD. 10th of August. The results of the week. What can stop the fall of the British currency? 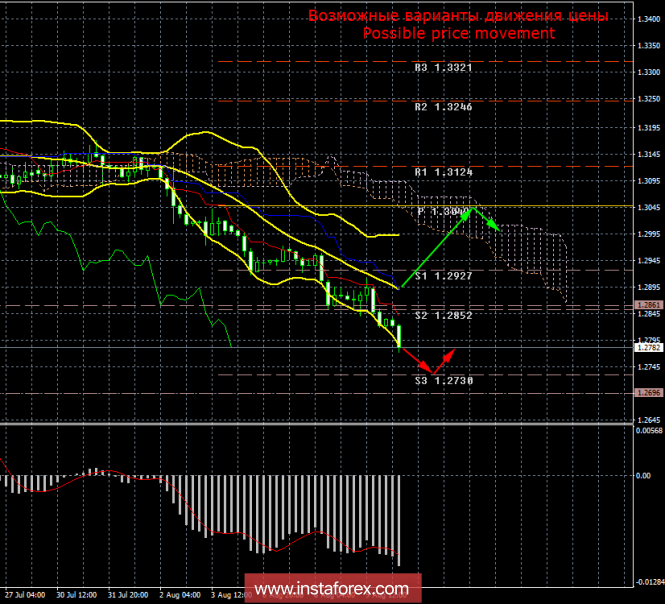 If the European currency at the beginning of the week slightly adjusted, the pound sterling fell down the whole trading week. The chance for the pound sterling was macroeconomic reports, which came out literally half an hour ago. However, as we can see now, they did not have a significant impact on the mood of traders. The preliminary value of GDP for the second quarter was 1.3%, and UK industrial production grew by 0.4% in monthly terms. Both indicators fully coincided with the forecast values. Thus, the last chance for the British currency this week will be the publication of inflation in the US. But, frankly, there is very little hope for this report either. First, in order to cause profit-taking on dollar positions, it is necessary for the report to fail. Secondly, even if the first condition is met, it is not a fact that traders will react to it. Thus, most likely, the pound sterling will remain in the downward movement until next week. And next week will be published changes in retail trade and inflation, which are important indicators of the state of the economy and can affect the pound sterling. Although much more important will be the new performances of Donald Trump regarding trade restrictions for US partners and the promotion (or lack thereof) in negotiations with the EU on Brexit.

The GBP / USD currency pair has almost completed the support level of 1.2730. Around this level or 1.2696, a reversal may occur, but there are no fundamental reasons for this yet. Thus, ideally, upon reaching these marks, you can record profits on short positions.

Long positions are now not recommended, since the downward movement is quite strong, and there are still no signs of an upward correction beginning.