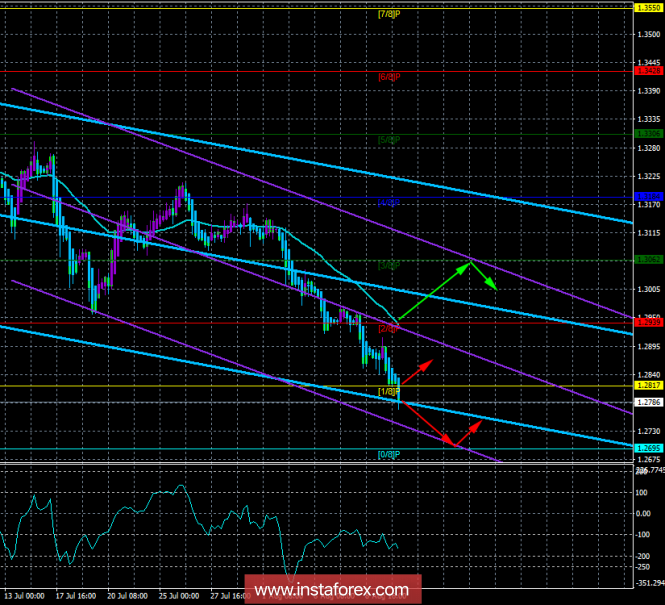 The GBP / USD currency pair continued its unhurried downward movement on August 9, ignoring the complete absence of important macroeconomic statistics. The advantage of the US dollar now is beyond doubt, traders do not even want to record profits on short positions. But today, on Friday, August 10, there will still be a few chances for a correction in the British currency. First, on Friday, many traders often record profits and close positions before the weekend, which can trigger a correction in a pair. Secondly, today, after 4 days of complete calm in terms of macroeconomic news will be published GDP of the UK for the second quarter (though only a preliminary value) and industrial production. Experts forecast that GDP can increase from 1.2% to 1.3%, and industrial production, to add 0.4%, after a decline in the previous month by 0.4%. Thus, if traders do not ignore this data and both reports do not fail, the pound will have the opportunity to at least grow a little. In general, the downward trend is likely to continue, as all of Britain’s political and economic problems have not gone away, and no new encouraging information on the progress of Brexit talks has appeared.

The pair GBP / USD has fulfilled the level of 1.2817. Since no signs of the beginning of correction at the moment, there is, it is recommended to continue to support the warrants until they appear. During the publication of news in Britain and the United States, you should transfer Stop Loss to a minimum, since a reversal is possible.

Buy-positions are recommended to be considered no earlier than fixing the price above the moving average line with a target of 1.3062. However, all previous attempts to start the uptrend failed, and today during the day we are unlikely to wait for the pound to be fixed above the moving-house.