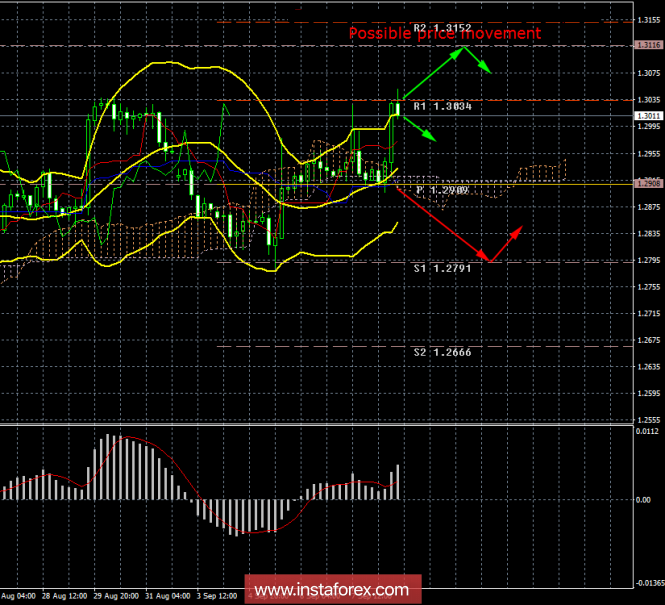 The British pound sterling on Monday, September 10, has grown quite strongly against the US currency. Although it will be more correct to say that the US dollar has fallen in price. The reasons for this were a minimum of two. Firstly, it is a scandal in the White House, which is connected with the article published in the Times, devoted to an interview with an anonymous official, who reported a certain plot against Trump. This conspiracy is expressed in restraining the inconsistent president in his actions on the world stage. Secondly, the GDP of the UK in July quite unexpectedly showed an increase of 0.3% instead of 0.2% of the forecasted. However, we believe that this news had no special effect on the growth of the pound sterling. Moreover, for example, the volume of industrial production in the same July fell through, amounting to only 0.1% with a forecast of + 0.2%. Thus, all the attention of traders will be riveted again to Donald Trump, who through the scandal seems to have decided to lower the rate of the national currency. Recall that Trump is an ardent opponent of the “expensive” dollar, and not without reason. The more expensive the dollar, the more expensive is the service of the US dollar, which is already expressed simply as an astronomical figure. It’s safe to say that all this behind-the-scenes games of the US government, of course, is impossible. However, the probability of such an option is high. One has only to recall all the scandals connected with Trump at the beginning of his reign by the country. Then the US dollar fell quite a bit on the joy of the White House. Thus, the topic with the scandal will be a counterweight to the new US trade policy, due to which recently the dollar has significantly strengthened against all its competitors.

The currency pair GBP / USD resumed its upward movement and fulfilled the level of 1.3034. The price rebound from this level can provoke a correction loop with the aim of the Kijun-sen line. If this happens, then the correction can be bargained off in small lots. Given the serious news background, which is expected in the near future, increased caution in trade will not be superfluous.

Sell-positions are recommended to be opened in case of overcoming the Kijun-sen line. In this case, a downtrend may resume with the first target at 1.2791. Also in the coming days are very likely, the so-called “swings”.