GBP / USD. 14th of September. The trading system “Regression channels”. Mark Carney fears exit from the EU without a “deal” 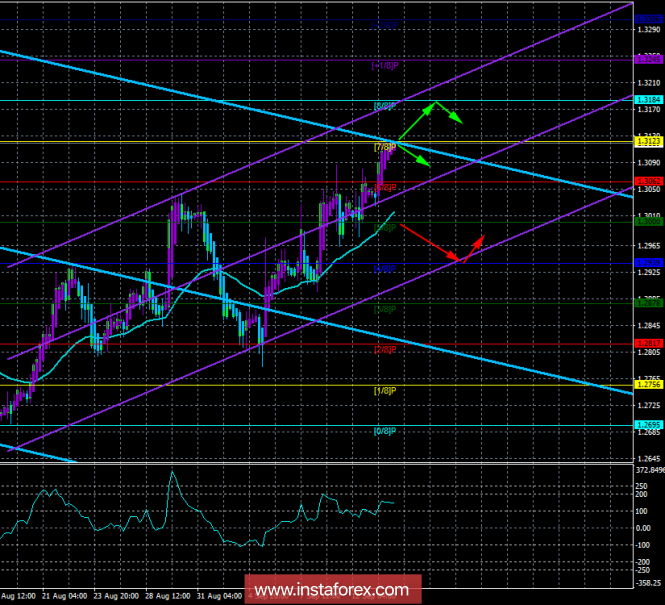 The currency pair GBP / USD on Friday, September 14, continues the upward movement and fulfilled the level of Murray “7/8”. In general, the upward trend in the pair remains, although the Bank of England did nothing for this during its meeting and announcement of the results of this meeting. Moreover, the Bank of England in the person of Mark Carney expressed, already once again, concern about the possible outcome of the negotiations on Brexit. According to Carney, an exit from the EU without a deal could seriously damage the UK economy, and this blow will be comparable to the 2008 crisis. No changes were made in the monetary policy. So, what do we have? The pound sterling continues to moderate growth, not related to the data from the UK. Accordingly, the reason for the strengthening of the pound is still data from the States. Yesterday’s report on inflation in the US disappointed, as it was recorded a slowdown in inflation to 2.7%. Further, there are no new data that would signal an exacerbation of the trade conflict between the states and China. And we have already said more than once that the dollar has a tendency to grow on the escalation of trade conflicts initiated by Trump. As a result, we have the growth of the British currency, which is based exclusively on data from the United States and in no way reflects the situation in the UK, where Mark Carney, the head of the Central Bank, begins to sound the alarm and warn that if there is no “deal” with the EU, the consequences can be the most sad.

The currency pair GBP / USD continues its upward movement and reached the level of 1.3123. A price rebound from this level will trigger a downward correction, but so far this has not happened, the purchase orders for 1.3184 remain valid.

Sell-positions are recommended to be opened in case of overcoming by movers of moving. In this case, the bears will take the initiative, and the shorts will be relevant for the purpose of 1.2939. Up to the moving-point at the moment about 100 points, so today it is unlikely to be expected to overcome.