GBP / USD. 23rd of July. The US president continues to excite financial markets 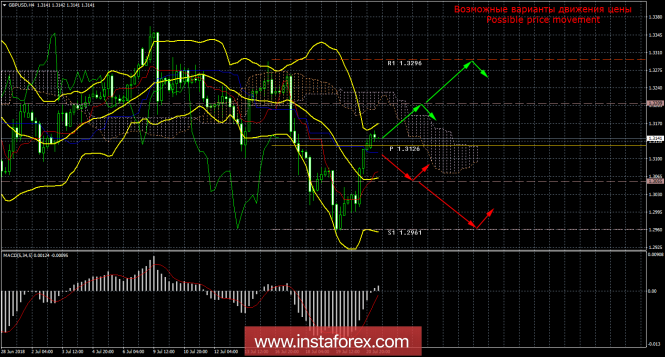 On the last trading day of the week, the topic of the British Brexit was left in the background. A huge amount of new and interesting information came from the US leader Trump. At times this information is even contradictory and discouraging. But first things first. To begin with, Trump threatens to impose duties on all goods from China. Secondly, it is going to introduce duties on the German automotive industry. Thirdly, he criticized the plan of Theresa May for Brexit, criticized the EU for dishonest trade with the States and small contributions to NATO. Fourth, he began to criticize not only his opponents on the international scene, but also the representatives of his own country. So a flurry of criticism also fell on the Fed and Jerome Powell. Trump believes that tightening monetary policy increases the dollar, which adversely affects the servicing of US public debt. But in his characteristic manner, after criticism, Trump noted that he respects Powell and the Fed. A little earlier, Jerome Powell himself described his experiences with Trump’s new trade policy. Against this background, traders may well begin to fear a possible confrontation between the US president and the Fed, although the latter is not under the control of Trump. At the same time, it should be noted that market participants finally began to exert pressure on the US currency in connection with all the events of recent weeks. Perhaps, they began to fear that Trump will try with all his might to reduce the dollar. Perhaps, due to the fact that the trade war looks now inevitable. And to what it can lead, now, perhaps, no one can say. If such a market reaction is not single and short-term, then the pound and the euro for the first time in a long time there are real chances for a serious recovery.

The currency pair GBP / USD continues to be corrected and overcame the Kijun-sen line. After a two-day growth, it would be logical to see a correction, especially given that the macroeconomic news calendar is empty today. However, there are no correction signals now. Therefore, the formalities are actually long for the purpose of 1.3209. They can be opened with small lots.

Sell-positions are recommended to resume with the targets 1.3055 and 1.2961, if the bears will find the strength to reverse the anchorage below the critical Kijun-sen line. The signal to sell the “dead cross” is still being preserved.