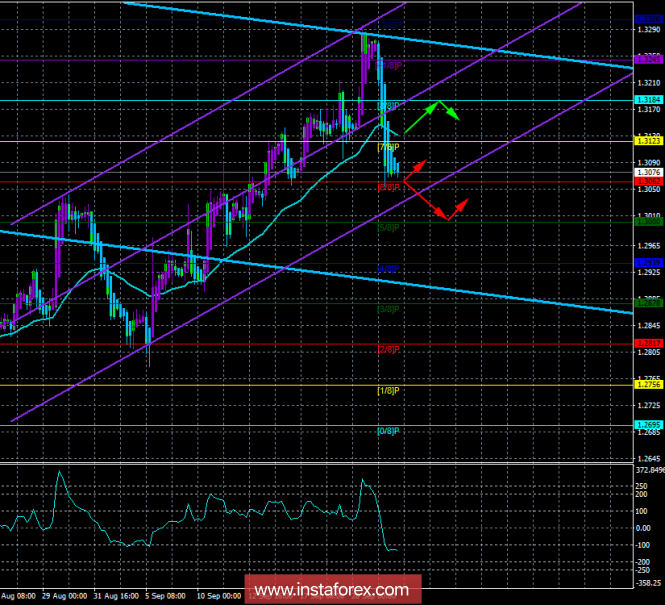 The currency pair GBP / USD on Monday, September 24, continues the downward movement, which began on Friday. On Thursday, we already wrote that the information that negotiations on Brexit allegedly reached an agreement have not been confirmed. And on Friday, Theresa May issued an official statement summing up the results of the EU summit, in which she announced that the negotiations had reached a dead end. According to the British Prime Minister, it is the EU that is to blame for this, which rejected May’s proposal and did not provide its alternative proposal. Thus, as before, two key questions remain unresolved: trade relations between the EU and Britain after Brexit and the border between Ireland and Northern Ireland. Conclusion: no agreements have been reached, as we wrote earlier, and the pound sterling completely logically fell down. It will continue to fall if May does not find a way to negotiate with the EU. And there are fewer and fewer chances for this every day. New concessions to May will cause even greater displeasure in the British Parliament and among the public. May’s plan and so many are displeased, even inside her own Party. New concessions will further undermine the credibility of her. A group of dissatisfied with its conservative policies can withdraw its premier earlier than planned in April 2019. All this political crisis will continue to put pressure on the British pound.

Orders for purchase are recommended to be considered no earlier than the reverse fixing of the price above the removals for the purpose of 1.3184. But to do this, you need a strong fundamental foundation, and it’s even hard to imagine what they can be.