GBP / USD. 25th of July. Results of the day. Pound takes the opportunity to grow in price 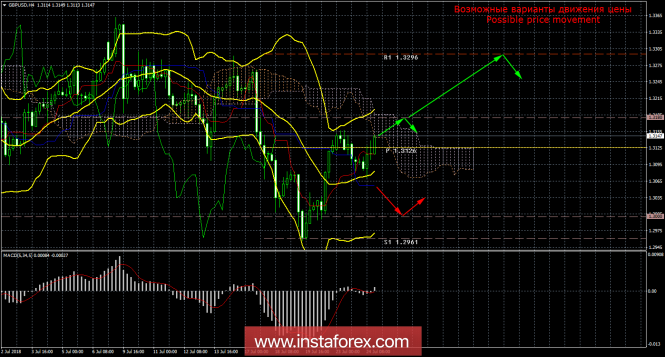 The pound sterling paired with the US dollar almost completely repeated the movement of the pair EUR / USD on July 25. After a slight correction, the price turned up, and at the moment, we can say that the uptrend has resumed. The reasons for the low demand on the second trading day of the week for the US dollar are the same as in the case of the euro. Traders began to seriously fear for the consequences of the trade war, which Trump is actively unleashing. Market participants understand that China will not exactly retreat and will introduce retaliatory sanctions for American goods. The EU can take a softer stance, but if the negotiations between the head of the European Commission Jean Claude Juncker and Donald Trump fail and Trump will impose duties on all products of the EU auto industry, then the EU will have to answer something. As for the UK, there has been no new data on negotiations with the EU over the past 24 hours. However, the pound sterling at any time may again begin to be pressured in connection with this issue. Thus, the position of the pound looks good only in the short term. Nevertheless, while the United Kingdom has not received a new portion of the negative, the English currency can continue to strengthen, taking advantage of the given chance. We also draw your attention to the development of the conflict between Iran and the States. This point should also not be overlooked, as it could potentially lead to a military conflict between countries. This, in turn, can create additional pressure on the American currency. Now, everything will depend on whether Iran blocks Iran’s oil supply through the Strait of Hormuz or not. The government of Iran has chosen a tough position and can fully realize its threats. But Trump clearly will not be ill-advised on this issue, even if the other participants in the nuclear deal did not support him in the issue of imposing a ban on the export of Iranian oil. Thus, a military conflict between the parties is quite probable.

The currency pair GBP / USD resumed its upward movement, so now it is recommended to stay in longs with small lots with the first target of 1.3180, as a signal was received from MACD for purchase. Tomorrow, bulls can develop their success and try to reach the first resistance level of 1.3296.

Sell-positions are recommended to open after fixing the price below the critical line. In this case, the upward trend will change to a downward trend, and the bears will be able to go on the attack with the first target of 1.3000.