GBP / USD. 25th of July. Theresa May decided to negotiate independently with Brussels 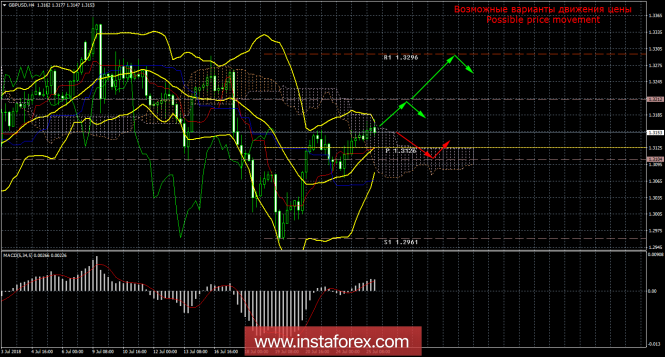 In the past few days, the pound felt more or less calm. The threat of imposing trade duties on almost all imports from China, as well as on all products of the automobile industry of the EU, has pushed the dollar. This is where we focus our attention – the dollar is getting cheaper, and not the pound sterling is growing. Also, the time-out for the British currency was due to the lack of new information on the issue of Brexit. However, today it became known that the British Prime Minister, Theresa May, decided to personally negotiate the withdrawal of the UK and the European Union. At the same time, Dominic Raab, the UK exit minister, who recently replaced David Davis in this position, will take the place of Deputy May. What does this mean for the UK and the pound sterling? First, the fact that now the negotiations will be conducted directly by the head of the country without intermediaries, which, as the recent practice has shown, can resign and vacate the posts in the middle of such an important process for the country, which certainly hinders the whole process. Secondly, Theresa May will be easier to negotiate independently, and the chances that the parties will still agree will increase. However, we draw the attention of traders to the fact that the topic Brexit can go back to the second plan if new information from the White House arrives. For example, today, when information about the progress and results of negotiations between Trump and Juncker begins to arrive. We believe that the parties are unlikely to agree amicably, although for the EU such an option would be most preferable. One way or another, demand for the dollar today and tomorrow may grow, and the weak rhetoric of Draghi at tomorrow’s press conference could spur demand for the US currency, which will indirectly affect the position of the pound sterling. 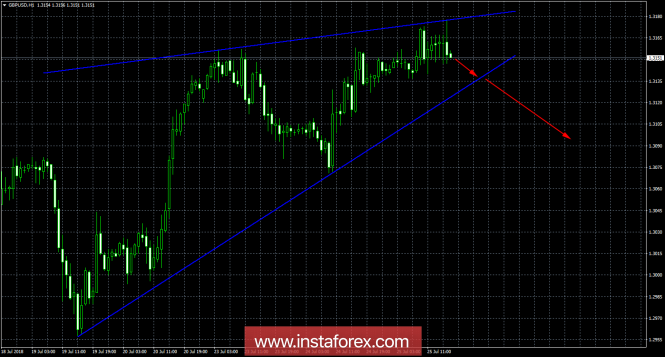 The potential of the upward movement, from the point of view of technical analysis, is running low. This is clearly seen on the hourly chart – the upward movement slows down. If traders manage to overcome the lower trend line, then the trend on the instrument will change to a downward trend. And on the 4-hour chart, we will expect the formation of a “dead cross” from Ichimoku.

The currency pair GBP / USD resumed weak upward movement, however low volatility and big doubts in overcoming Senkou Span B line call into question a further upward move. Therefore, we recommend shortening the pair with targets 1,3104 and the Kijun-sen line at the first signal (for example, overcoming the trend line on the hourly chart or reversing the MACD down).

Buy-positions are recommended to be opened after the price rebound from the trend line, MACD on the 4-hour chart should be directed upwards. In this case, the bulls can continue to press on the pair and gain a foothold above the cloud Ichimoku. The target for Longs is 1.3212.