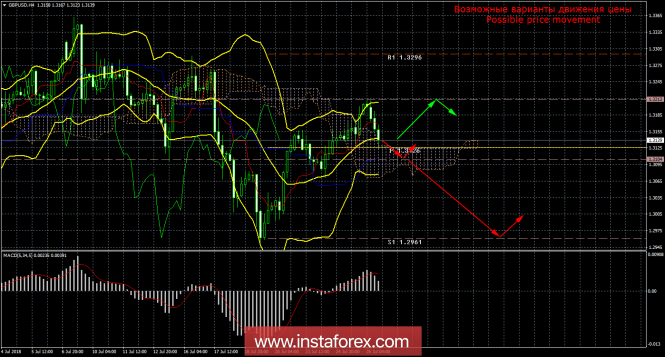 The decision of the European Central Bank on monetary policy and rates, as well as the speech of Mario Draghi at the press conference very indirectly related to the UK and the pound sterling. But, as is often the case, the Euro-currency simply pulled the English currency behind it. The ECB chairman’s speech is not difficult to call weak. Moreover, Mario Draghi did not give the markets any specific information, except for that which had already been known for a long time, about the timing of the completion of the quantitative incentive program and the period of ultra-low rates. The pound, after having worked out the target level of 1.3212, which we designated yesterday, turned down and began to decline. Further prospects for the British currency will now again entirely depend on the progress of negotiations on Brexit. Perhaps, even in the near future, the pound will again move to growth, as Trump and Junker seem to have agreed that, first of all, it is good for Europe. However, it should be noted that almost any new application of Trump regarding trade duties can turn everything upside down again. To say that the issue of a trade war, at least with the EU, is closed, it is impossible. So, in any case, new information on this topic will come from both sides. However, the British need to pay more attention to the actions of Teresa May in the near future, which took control of negotiations with the EU on Brexit. In the meantime, Spanish Foreign Minister Josep Borrell said that the timing of the UK’s withdrawal from the EU could be removed from March 2019. As he noted, all EU countries can take a unanimous decision to postpone this date. From a technical point of view, the correction is continuing, and there are no signals for its completion at the moment.

The currency pair GBP / USD began to be corrected. Thus, the price can work out in the coming hours the critical Kijun-sen line. When the price rebounds from Kijun-sen, it is recommended that you resume the pair’s purchases with a target of 1.3212.

Sell-positions are recommended to open after fixing the price below the critical line. In this case, the trend for the instrument will change to a descending one, and the bears will be able to develop their success with targets of 1.3035 and 1.2961.