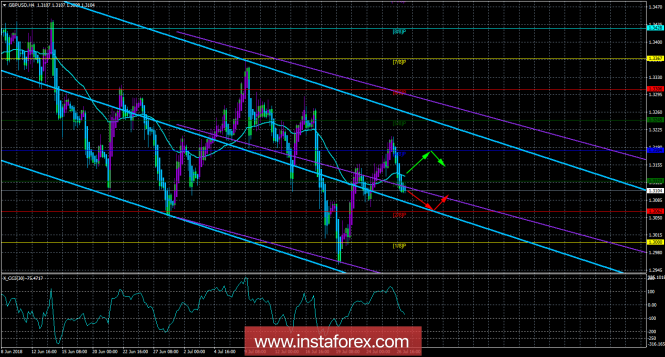 The currency pair GBP / USD On July 26, against the backdrop of Mario Draghi’s speech at a press conference on the ECB meeting, as well as the EUR / USD pair, began a downward movement. Bears have sold the moving average line, so the trend for the instrument has changed to a downward trend. As you can see, the pound sterling does not manage to form at least a short-term uptrend. It is not surprising, given the unresolved issue with Brexit (and the whole process has been going on for two years already), the political crisis in the UK, the weak macroeconomic indicators of the country in the first half of the year and even the possible delay in the country’s exit from the EU if the parties fail to reach an agreement on time. The next most important event for the pound event will be meetings of the Bank of England next week. And it is necessary to prepare for this event right now. The last time three members of the monetary committee voted “for” the increase in the key rate. However, we continue to believe that the British regulator will not go on tightening monetary policy in the near future because of the problems listed above. But if all the same BA will take such a risky step, it can support the British currency only in a small temporary area.

For a pair of GBP / USD, the bears took the initiative and overcame the removals. Thus, today it is recommended to be in shorts with the aim of Murray’s level “2/8” – 1.3062 before the turn of the indicator of Heikin Ashi to the top, which will indicate the beginning of the upward correction.

Buy-positions are recommended to be opened after the reverse fixing of the price above the removals for the purpose of 1.3184. In this case, the bulls will have a new opportunity to still form an uptrend, and the current decline will be regarded as a correction.