GBP/USD. 29th of October. Results of the day. The end of Theresa May’s political career? 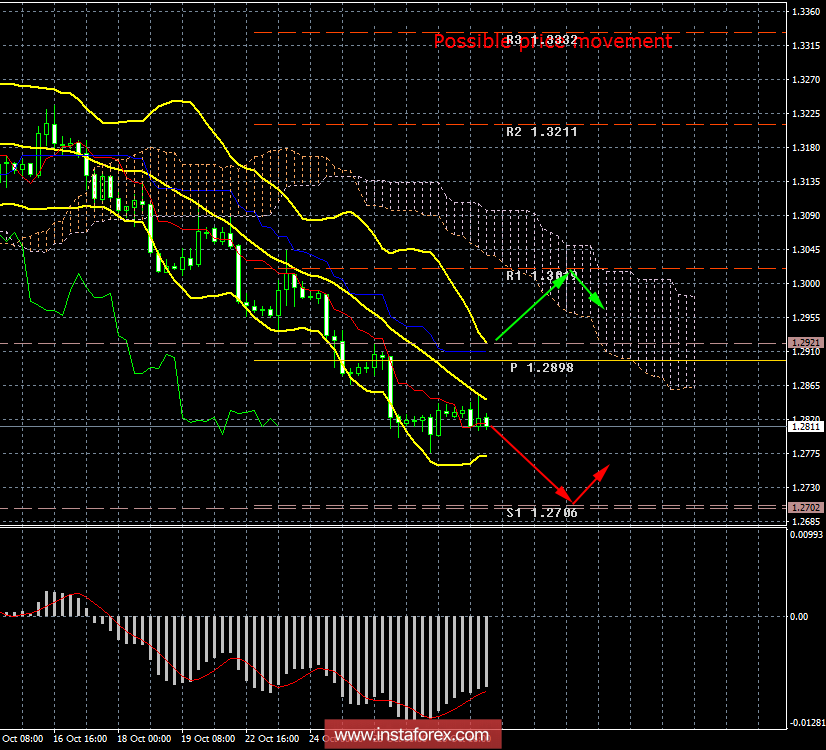 On Monday, October 29, the euro barely fulfilled the Kijun-sen line, and the pound was unable to do so. On the one hand, there were no fundamental grounds for initiating a correction. On the other hand, for a purely technical turn of the correctional movement, fundamental grounds are not needed. Thus, we once again state a fact – there are fewer buyers of the GBP/USD pair than the EUR/USD. As in the case of the euro, the MACD indicator turned up only to signal the temporary suspension of the pair’s fall. US macroeconomic statistics had virtually no impact on the course of trading, although it could be interpreted negatively if desired. Meanwhile, a possible second referendum on Brexit is already being discussed. As we wrote this morning, more than a million people signed a petition on this issue. The reason for the organization of this process was the displeasure of so many citizens of the conditions under which the UK can leave the EU or without it. In other words, the number of dissatisfied with the policy of Theresa May is growing and now the population of Britain is ready for rallies and petitions. By and large, this could mean the end of May’s political career. She failed to come to an agreement on Brexit with the EU, the country was seized with a political crisis, there were several high-profile resignations in Parliament. If the second referendum is still held and the decision is made not to go out of the EU, then Theresa May is unlikely to hold her post, and the political forces in Parliament are likely to be redistributed.

The GBP/USD currency pair has slightly adjusted and can now resume the downtrend with the first target at 1,2706. If the MACD indicator turns down, it will serve as a signal to open new sell positions with the specified target.

Buy orders are recommended to be considered not earlier than traders overcome the critical line. This will mean a possible change in the trend of the instrument, and the first target for longs small lots will be the resistance level of 1.3019.