GBP / USD. 2nd of October. The trading system “Regression channels”. Boris Johnson may take the post of Theresa May 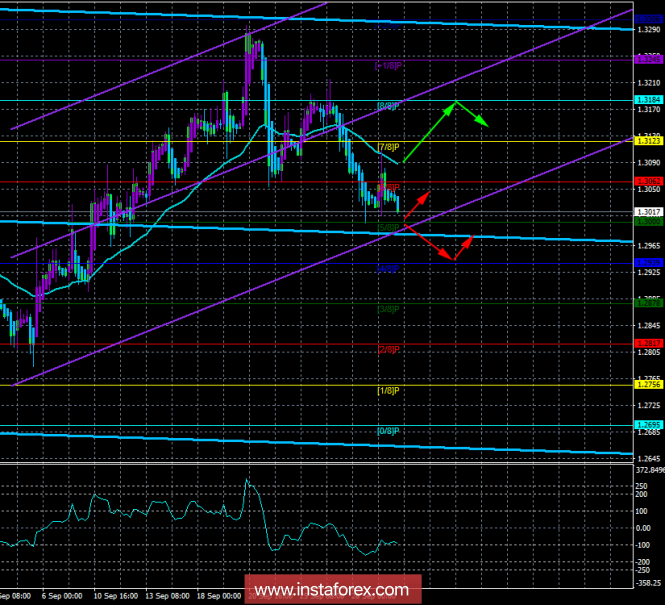 The British pound sterling also continues to fall in price, and interesting news continues to come from the UK. First, an anonymous source from the Conservative Party of Great Britain said that Boris Johnson could postpone Brexit talks for at least six months if he became prime minister. By itself, the interpretation of “if you become prime minister” is alarming. In essence, this means that if May is overthrown, the new prime minister is already selected. And since such conversations take place, it means that the option with the resignation of May is not an empty phrase. At the same time, experts calculated how much Brexit UK currently costs. In a week, the country’s economy loses about 500 million pounds, and yet the country has not even officially left the EU. Also, research shows that the UK is now the slowest-growing of developed countries. In principle, this is logical, given all the political and economic perturbations in Britain. However, what will happen after March 2019? What will happen if the “deal” with the EU does not take place? Most likely, the economic situation will worsen even more. And in this section, it becomes clear that there will be no fundamental support from the UK for the pound in the coming months.

The currency pair GBP / USD resumed its downward movement after a slight correction to the moving average. The first target of 1.3000 is almost completed; if it is overcome, the next target for short positions will be Murray’s “4/8” level – 1.2939.

It is recommended to open buy positions not earlier than traders overcome the moving average line. In this case, the trend in the instrument will change to ascending and the long positions with the target of 1.3184 will become relevant.

The lower linear channel is the purple lines of the unidirectional movement.