GBP / USD. 4th of September. Results of the day. Carney remains the head of the Bank of England 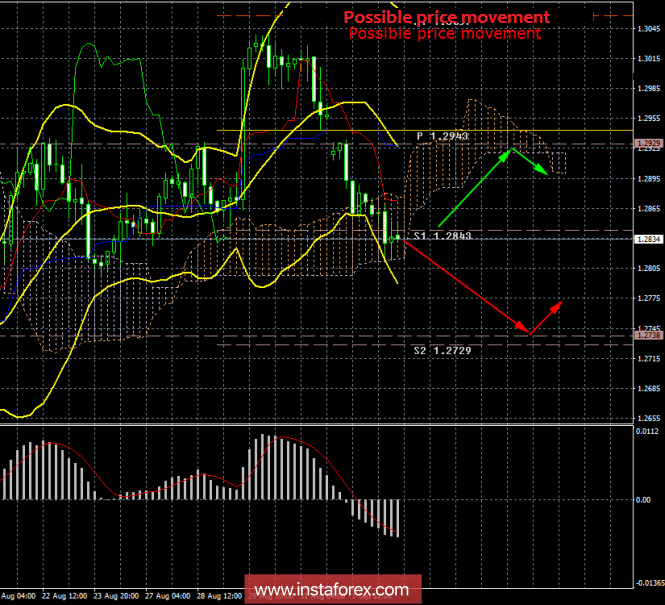 The British pound continues to fall against the US currency. The price has overcome the first support level of 1.2843, and at the moment, there is not one sign of the beginning of the upward correction. There is also no new data on Brexit. On the topic of the trade war, nothing new came from the White House either. And yet, the pound sterling continues to decline. Simply because there is no reason for its growth. Today, on September 4, it became known that the head of the Bank of England, Mark Carney, extends the term of his powers until the Brexit process is completed. The manager of the Central Bank in the UK is usually chosen for 8 years. Carney has been in this position since 2013, and has repeatedly stated his desire to resign after 5 years. However, in such a difficult period for the UK economy, the Canadian still decided not to leave and continue the government. Quite optimistic news for Britain. All her optimism, however, in the absence of negative. If Carney also decided to leave in the middle of the Brexit procedure, then it would be another blow to the United Kingdom. We will remind that David Davis and Boris Johnson have already left their posts. He is negotiating with the EU now with his own hands Theresa May. And Britain itself was overwhelmed by the political crisis. But in itself this news has not had a favorable effect on the pound sterling. Thus, in the near future is expected to further decline in the British currency.

The currency pair GBP / USD continues to move down. Thus, today and tomorrow morning, it is recommended to stay in short positions with a target of 1.2738. The signal to manually close the shorts will be a turn up the MACD indicator.

The buy-positions can be considered as minimum lots, if an upward correction begins, as indicated by the MACD indicator. The goal for long positions in this case will be the level of 1.2929.

Kijun-sen is the blue line.