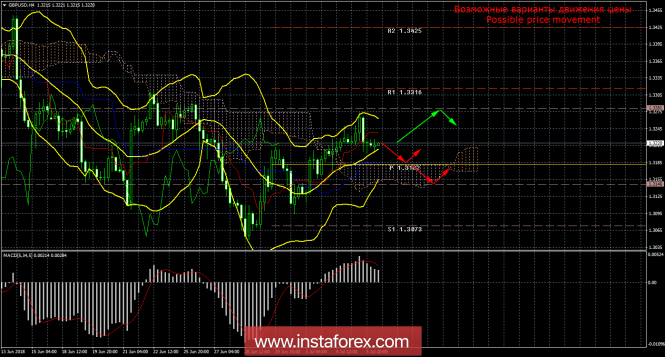 The British currency in the first half of the day showed growth against the background of not too optimistic macroeconomic data from America, but closer to the night the advantage again shifted to the dollar.Thus, at the end of the trading day, the pound sterling fell by several points.The Fed’s minutes can be interpreted in two ways. On the one hand, there was no outright negative in it, and the fed’s plans to raise the rate remain in force, on the other hand, FOMC members are afraid of a trade war. Also there are concerns about the growing tension between the US, EU and China, and the Bank of England Governor Mark Carney. In his July 5 speech, he said that duties imposed by the United States against trading partners and retaliatory sanctions can put serious pressure on the growth of the world economy in the near future. Thus, Carney believes that the trade war will necessarily affect the volume of production, the volume of trade operations between the countries involved in the conflict. According to Carney’s calculations, only America can lose 2.5% of GDP from sanctions that are imposed or will be introduced by China and the European Union. And the global decline in GDP due to trade taxes may decrease by 1%. Also, the head of the British regulator noted that the UK economy will grow in line with previously announced forecasts, despite the trade war, noting also that in the next year or two, it will probably be necessary to raise the key rate. Karni believes that the economic downturn in the first half of 2018 is a temporary phenomenon, so further the country is expected to accelerate growth. However, we believe the outlook for a rate hike in the next year or two is nothing more than an attempt to calm the markets. If there is a new recession in the UK, Carney can easily say that with the increase in rates will have to wait. Thus, the key role in this matter will be played by macroeconomic statistics in the next 2-3 months.

Shorts can be considered not before fixing the price below the cloud Ichimoku, as now the movement is corrective, moreover – the correction may be completed in the next few hours. Thus, the opening of shorts is now associated with high risks.