GBP / USD. 6th of August. Results of the day. China begins to respond with US countermeasures 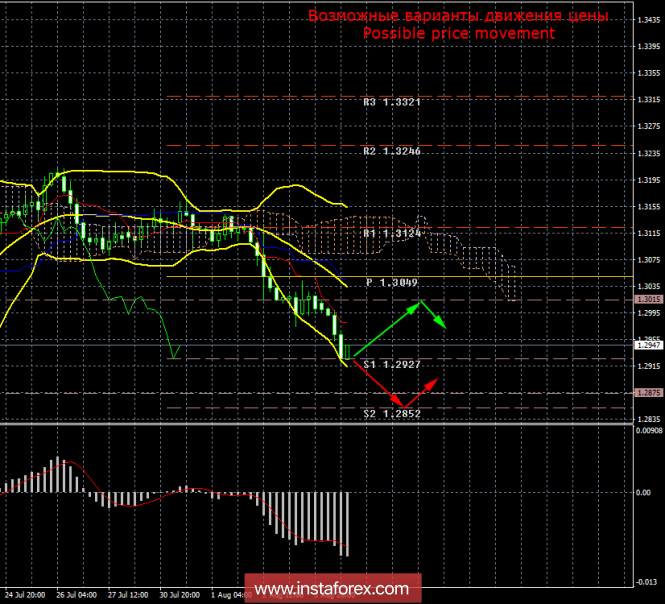 The currency pair GBP / USD on the first trading day of the week, as well as the EUR / USD pair, continues the downward movement. In the UK today there was no significant economic publication, as in the United States. However, interesting news came from China. It turned out that Chinese oil companies decided to abandon purchases of American oil. Most likely, it was not without the influence of the Chinese authorities, within the limits of countermeasures, on trade taxes, which Washington threatens to introduce. It is not clear yet whether a decision will really be taken to abandon the hydrocarbons from the United States, but in itself a bad sign for America. Firstly, it is the loss of an item of export earnings. Secondly, Beijing shows that it is not going to be a “whipping boy” and does not intend to make any concessions like the EU. Thus, now one can say with certainty about one thing – the escalation of the trade conflict between the PRC and the US. So far, traders still interpret this news in favor of the US currency. But, as we said earlier, over time, the mood of traders can change the opposite. It should be understood that the States will also suffer losses in the trade war. The companies importing Chinese products, and companies that export products to China, and the end user will suffer too. Thus, we believe that, as soon as the first negative consequences of Trump’s policy are visible, the US dollar will be pressured, despite the “tough” position of the Fed. By the way, it is the Federal Reserve that is most concerned about Trump’s policy of protectionism. Powell has already noted that he does not know what will end the trade war. And this means that the consequences can be negative. Once the head of the Federal Reserve is worried about this, then he has grounds.

The currency pair GBP / USD continues to move down and worked out the first target of 1.2927. The price rebound from this target may trigger a correction, and the overcoming is a further decline to the levels of 1.2875 and 1.2852, which are recommended to be rejected if there is no signal of the beginning of correction.

Orders for purchase can be considered small lots with targets for the critical line and the level of 1.3015 if an upward correction starts, which can be signaled by turning the MACD indicator upward.