The pound continues to fluctuate in a wide price range, reacting to the contradictory fundamental background. Optimism is replaced by uncertainty and the usual pessimism, and the price of the GBP/USD follows the mood of traders.

Topic number 1 is still Brexit, so the corresponding news flow forms the agenda. It should be noted that prince impulses are becoming more frequent and more intense – the pair is tearing up rapidly on the encouraging statements and just as equally rapidly rolling back on subsequent disappointments. Today, the pound has updated its monthly high, rising to 1.3051, and after a few hours was in the middle of the 29th figure.

It is noteworthy that the pair has kept from further decline and, by and large, is now trading at the opening level of the trading day. Such “broad flights” were due to conflicting comments from the British and Europeans, which were voiced by the press. So, in the middle of the day there was a comment by British Finance Minister Philip Hammond, who was optimistic about the progress in the Brexit talks, saying that “in the coming weeks and months, all efforts will be made to reach an agreement with Brussels.” 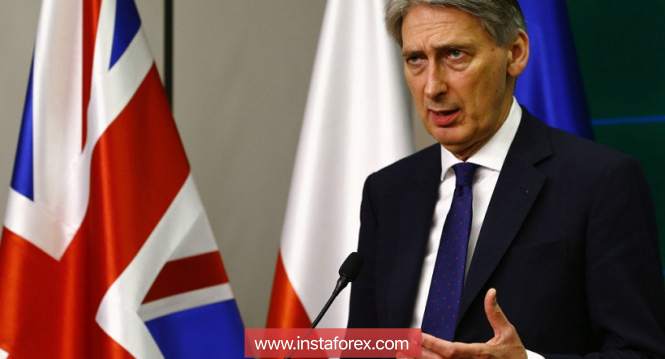 Almost simultaneously with this statement, there was a comment on Theresa May for the press. He said the British Prime Minister and the head of the European Council Donald Tusk recently held “very productive” negotiations, while London and Brussels “are very carefully” working on their positions, so that at the end of September (or rather, in the 20’s) they could agree on a common preliminary position at the unofficial summit of the EU.

This rhetoric of British officials is consistent with the previously voiced position of the EU’s chief negotiator Michel Barnier. He also was very positive about the prospects of the talks, outlining timelines – October-November. According to him, the main agreements on Brexit will be reached within 6-8 weeks, and at the November special summit London and Brussels will officially “dissolve the marriage”.

However, the news flow today is ambiguous. According to one of the British publications, the real situation with the negotiation process is not as rosy as it is presented by the official speakers. According to insider leaks, high-ranking officials allegedly warned their British colleagues that they were not going to make significant concessions without mutual steps on the part of London.

In addition, according to the publication, the European Union is still skeptical about Theresa May’s plan to exit the country from the Alliance. Such a position is clearly discordant with a s of positive theses that were voiced by both the British and European sides. The market is very suspicious about this news, but did not dramatize the situation (since the information is unverified, in fact, it’s rumors), so the price of the GBP/USD returned to the boundary of the 30th figure.

The problem of the bulls of the pound/dollar pair also lies in the fact that the general fundamental background of Tuesday contributes to the growth of the US currency. Firstly, the first meeting of EU and US trade representatives ended in nothing, after which rumors about the renewal of trade tension between Washington and Brussels returned to the market. Let me remind you that the summer meeting between Donald Trump and European Commission President Jean-Claude Juncker ended effectively: the parties agreed to hold talks, come to a mutually beneficial compromise and conclude a kind of “non-aggression pact”. However, the beginning of negotiations of the US-EU working group was not impressive, as it was not marked by any breakthrough. The parties announced that the next round of talks will be held at the end of September, when they will start working on a future deal.

In my opinion, it is still too early to panic, but traders still increased demand for the dollar. Moreover, another trade conflict – between the US and China – is still gaining momentum. On Tuesday, it became known that China is going to apply to the WTO to obtain appropriate permission to impose sanctions against the United States for non-compliance with Washington’s decision in the dispute over US dumping duties. After this statement, the market again started talking about the escalation of the trade war, recalling in this context, Trump’s recent threats to impose additional tariffs on all Chinese imports. Mutual attacks increased the overall tension in the markets, and the dollar began to be in demand again, as traders see it as an “safe-haven”.

However, in the context of the GBP/USD pair, the strengthening of the dollar is secondary. The topic of Brexit is certainly in first place. The ambiguous fundamental background on the day prevented the bulls from continuing the upward offensive, but the frequency of positive signals regarding the prospects of the “divorce process” suggests that short positions on the pair are very risky.

In addition, the macroeconomic data published this week strengthened the position of the pound, the growth of which is now restrained only by Brexit. Let me remind you that the main indicators came out in the green zone: GDP growth, unemployment, inflation.

A separate line should be noted, the growth of wages: this indicator is especially important for the British regulator in the context of the prospects of monetary policy. According to many experts, if Brexit is held on the “soft” scenario, and macroeconomic trends continue, the Bank of England next year will be forced to double the interest rate twice. Thus, the positive signals for Brexit will continue to exert a strong influence on the dynamics of the pound/dollar pair.

Technically, the Ichimoku Kinko Hyo indicator has finally formed a “Golden cross” signal on the daily chart, which indicates the priority of long positions. The nearest resistance level (price target) is at 1.3070 – at this point the upper Bollinger Bands line coincides with the lower boundary of the Kumo cloud. If the pair overcomes and fixes above this mark, the next price target will be the price of 1.3165 – this is the upper limit of the Kumo cloud.