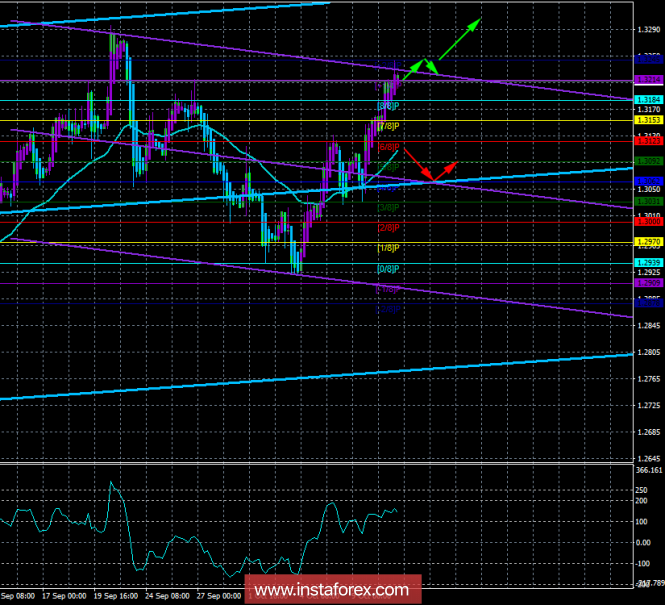 The currency pair GBP / USD on October 11 continues a confident upward movement based on rumors that the Brexit talks will end with the conclusion of a “deal”. We continue to draw the attention of traders, that there was no official information about this either. Thus, nothing has been decided yet, or at least nothing is known to the general public. There is not much time left before the deadline, and according to Theresa May, the last round of negotiations failed. This is an official information. Meanwhile, the UK GDP report fell through. In August, a zero increase in GDP was recorded, while forecasts predicted an increase of 0.1%, which is still lower than the previous month, where an increase of 0.3% was recorded. However, this important report was completely ignored by the market, which once again indicates that traders are now focused on the Brexit theme and are confident in the positive outcome of the negotiations. Mark Carney will be giving a talk today, who can just share new information on the Brexit topic. In addition, in the United States, a report on inflation will be published, but in the current environment, the market reaction can be very restrained on this information. Any information or rumors about negotiations between the EU and Britain can further increase the demand for the British pound. We continue to emphasize that if the “deal” will not be signed, most likely, the pound is waiting for a new prolonged fall.

The currency pair GBP / USD continues to move up, as indicated by the indicator Heikin Ashi. Thus, it is now recommended to continue to remain in long positions with a target of 1.3245 until the Heikin Ashi indicator turns down.

Sell orders will become relevant only after traders overcome the moving average line, for which, under current conditions, a fair amount of negative on Brexit will be required. Thus, at least today, such consolidation is not expected.