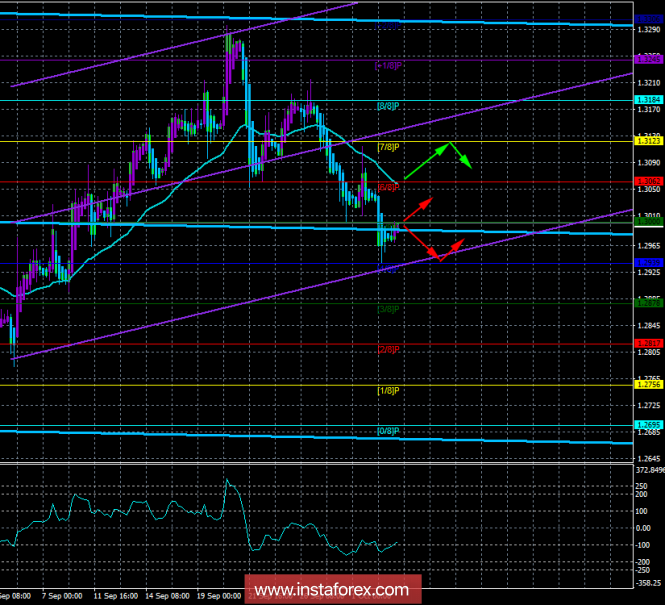 The currency pair GBP / USD on the night of October 3 made an attempt to start an upward correction. This is signaled by one closed purple bar. Yesterday’s Jerome Powell’s speech was left unattended by traders, since, by and large, the head of the Fed did not tell anything new about this. Also yesterday, there was a speech by Boris Johnson, who once again criticized May’s plan for Brexit and urged parliament to abandon it. According to Johnson, the so-called Checkers Plan will make the British economy vulnerable and dangerous from both a political and an economic point of view. The former head of the British Foreign Ministry believes that the best option would be an agreement on the “Canadian” type. That is, London will be able to independently negotiate with the countries of the bloc. It seems that Johnson seriously intended to take the chair of the British Prime Minister. At least, his frequent criticisms of May are clearly intended to sow additional doubts that May is doing everything right. One way or another, all these political confusions obviously do not add optimism to investors. Thus, in the near future, the pound can continue to exert pressure. Today in the UK, index of business activity in the services sector will be published.

The currency pair GBP / USD may begin to be adjusted if the second closed bar of purple color is formed. In this case, the short positions for a while will become irrelevant, but long positions can only be considered after the price is fixed above the moving average.

Sell positions are recommended to open in case of resumption of the downward movement, which can be determined by the blue bars of the Heikin Ashi indicator. In this case, the goal will be the level of Murray “4/8” – 1.2939.