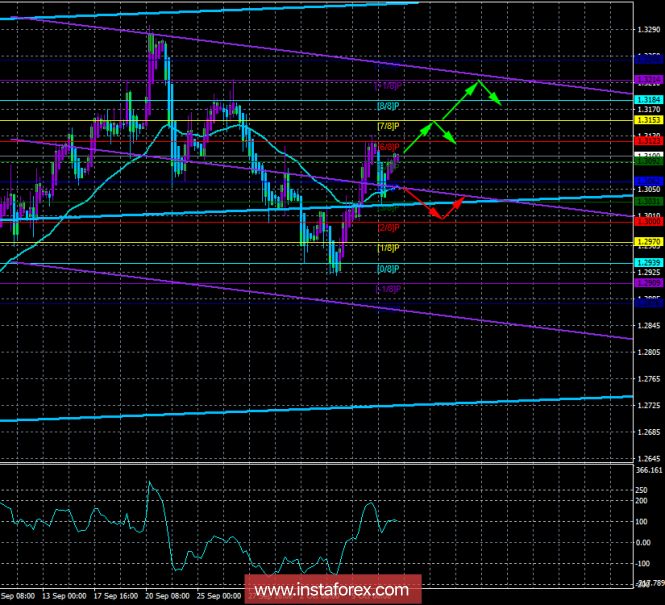 The currency pair GBP / USD on October 9 adjusted to the moving average line and bounced off it, resuming the upward movement. Thus, the correlation between the euro and the pound is now extremely low, and traders seem to still see in the “insider” information hints at the successful promotion of negotiations between the EU and the UK on Brexit, which provokes buying the pound sterling, while very restrained. We still believe that even if negotiations, according to Michel Barnier, have moved to the final stage, there is still no official information on this matter. Thus, the markets are not aware now of what agreements have been reached between London and Brussels. Accordingly, traders respond only to the expectations of a successful “divorce” of the EU and Britain with a “deal”. As absolutely everything was already understood, the absence of a “deal” would be extremely disadvantageous to both parties, but especially to Britain. Moreover, within the UK itself, disputes continue over the May plan for exit from the EU. Very few politicians support him, moreover, there was even talk of dismissing Theresa May from the post of prime minister of the country. Nevertheless, despite these conversations, both sides, not without a share of bluffs, continue to argue in advancing the negotiations, and they seem to have even agreed on certain points concerning the border between Northern Ireland and Ireland.

The currency pair GBP / USD has rebounded from the MA and is ready to continue the upward movement. Thus, before turning Heikin Ashi down, it is recommended to trade for a raise with targets at 1.3123 and 1.3153.

It is recommended to return to sell orders after traders have overcome a moving average line. In this case, the target for trading for a fall will be Murray levels of 1.3000 and 1.2970.

The lower linear channel is the purple lines of the unidirectional movement.