GBP / USD: plan for the American session on October 17. The pound falls on weak data on inflation in the UK

To open long positions on GBP / USD, you need:

The buyers failed to get above the resistance level of 1.3189 in the first half of the day, and weak data on the consumer price index in the UK led to the sale of the pound. The support area of 1.3125 survived on the first test, however, the sellers broke it from the second time. Currently, it is best to expect long positions after the update of this week’s low around 1.3083, or after returning and fixing at the resistance level of 1.3144, which will lead to a rapid upward correction of the pound to the area of 1.3189, where I recommend fixing the profits.

To open short positions on GBP / USD, you need:

As long as trading is conducted below the resistance level of 1.3144, the pressure on the pound will continue. The main goal of sellers remains at least this week at 1.3083, where I recommend fixing the profits. At any time, the results of the next Brexit negotiations can be published, so that we do not forget to place stop orders, since the volatility of the pound may increase significantly. In the case of an upward correction to short positions, you can again return on a false breakdown from the resistance of 1.3144 or to the rebound from 1.3189.

The pair has fixed below the moving average, which indicates the formation of a downtrend.

The lower limit of the Bollinger Bands indicator was broken, which led to the sale of the pound. As a guideline for sellers, in the case of a correction of a pound up, we can consider the average border of the indicator in the region of 1.3165. 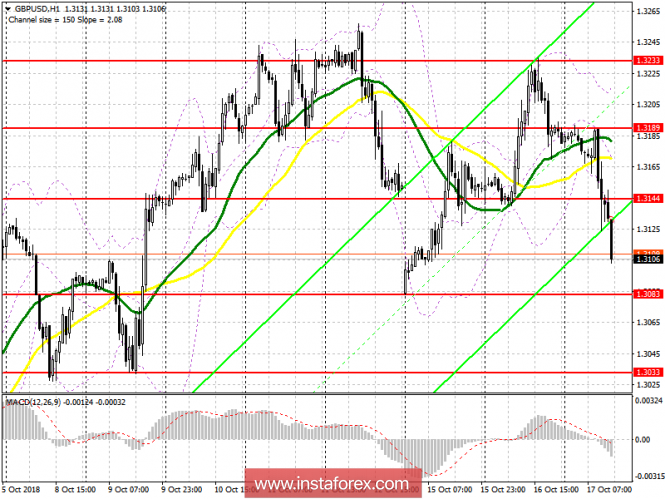