GBP/USD: plan for the US session on September 19. The rise in inflation was the reason for profit-taking by large players

To open long positions for GBP/USD, it is required:

Buyers coped with the task for the first half of the day, breaking through the resistance of 1.3175, which I paid attention to in my morning review, and reached a new high of 1.3214, where I recommended to lock in the profit. This was helped by good data on inflation in the UK, which increased significantly in August this year. At the moment, buyers of the pound are trying to stay above the support of 1.3116, but it is best to open long positions in GBP/USD by rebounding from the low of 1.3074 and 1.3026. Only the formation of a false breakout with a return to the support of 1.3116 in the second half of the day can lead to the recovery of the pound to the resistance area of 1.3170.

To open short positions for GBP/USD, it is required:

The sellers of the pound are aimed at breaking the support of 1.3116, but first it would be nice to make sure that there is a major player in the resistance area of 1.3170. Failure to consolidate above this level in the second half of the day will be a direct signal to the pound’s sales in the expectation of a breakthrough of 1.3116 and an update of the low in the area of 1.3057, where I recommend locking in profits. In the event of a large wave of growth in the GBP/USD pair above 1.3170, a monthly high of 1.3214 remains a good selling area.

The 30-day moving average returned to one level from the 50-day average, which indicates the formation of a corrective decline in the pound.

Support is provided by the lower limit of the Bollinger Bands indicator, but I do not recommend to hurry with the purchase of the pound in the current conditions. 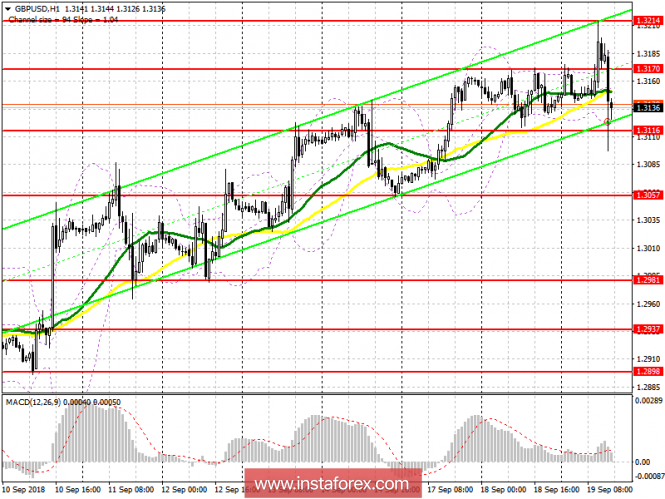