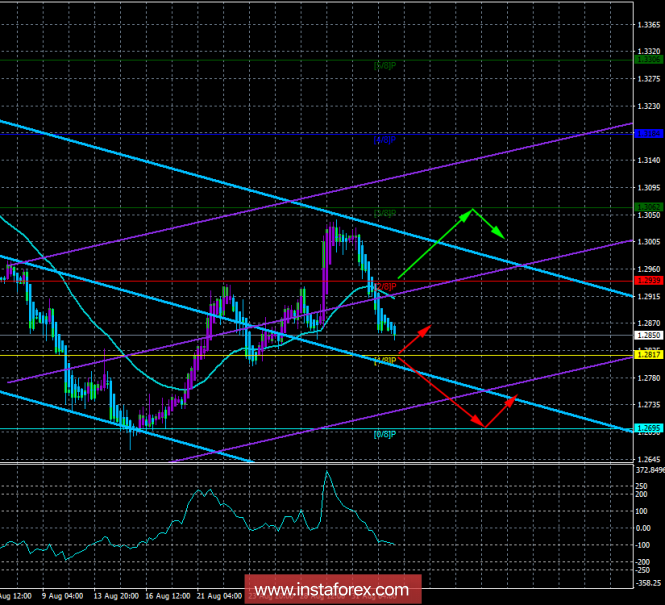 The lower channel of linear regression.

The GBP/USD currency pair resumed the downward movement after a bit of unexpected growth in the area of 1.30. As of this writing, as the news published about Brussels’ “unprecedented” proposal, nothing extraordinary and optimistic happened on the pound sterling. It seems that traders realized this after this event, which led to new sales of the British pound. On the first day of the week, the English currency does not have optimistic news, and no news received. But today in the British Parliament, the head of the Bank of England Mark Carney and several members of the monetary committee will have a speech. It is expected that the Brexit issues, its impact on the country’s economy and, accordingly, the actions of the regulator will be raised. Also, Carney is unlikely to bypass the question of the central bank’s monetary policy since the “deal” with the EU is still not yet accomplish. It should also be noted that Carney has already hinted that in case of a “tough” scenario for the EU exit, the BOE can even soften the monetary policy. And then, we return to the question that was asked when Carney and the central bank decided to raise the key rate. Why it was necessary to do it at that moment, against the backdrop of the failed macroeconomic indicators in the first half of the year, along with the unresolved issues on Brexit and an obvious political crisis in the country? We believe that the Bank of England was very quick with this decision, and it did not help the pound sterling anyway in the confrontation with the dollar.

The GBP/USD pair has overcome the trend and continues to move down. The first target for short positions now stands at 1.2817, and if it is overcome, the target will be 1.2695. The signal for manual closing of selling orders will be the reversal of Heiken Ashi to the top.

Long positions can be considered after traversing the traders moving average. In this case, the trend for the instrument will ascend again and the target for the upward movement will be 1.3062.

The lower channel is linear-violet lines of unidirectional motion.

Heiken Ashi is an indicator that color bars in blue or purple.