GBP/USD: the allusion to a “soft” Brexit led the pair to the 30 figure

The fundamental background of the pound-dollar pair is changing with kaleidoscopic speed. On Tuesday, traders were full of optimism in anticipation of a global “thaw” in relations between the US and a number of other countries, but today the market began to sink into the usual pessimism. Some fundamental factors that supported risky currencies turned out to be an “abrasive side”, thus neutralizing the initial effect.

For example, the official representative of Germany on Wednesday denied the information that appeared on Tuesday in the American press that the Germans are ready to provide Turkey with financial assistance, thereby preventing a crisis in the banking sector of the eurozone. The refutation was unambiguous: the Germans do not intend to provide any direct financial assistance to Ankara, although other support options are not ruled out. After that, the Turkish Lira continued its dive, returning to the annual (record) low against the dollar. The prospect of the Turkish collapse affected the financial markets – the widespread decline of the dollar has been suspended, including in the pair with the British currency.

The Chinese “front” also stopped supporting interest in risky currencies. First, the dynamics of growth of the Chinese economy is of concern. The set of leading indicators suggests that the economy of China in August will show a slowdown amid falling stock prices, deteriorating sentiment in the business environment and, of course, trade barriers. According to some experts, the consequences of the tariff policy of the White House will be appear gradually, and the first “flowers” of the trade war will manifest itself in August.

This news background determined the dynamics of the currency market in the first half of the day, supporting the growth of the dollar. Everything changed at the beginning of the US session, when traders were impressed by the sensational news about the “special offer” of Brussels on Brexit. Although this morning the press discussed the behavior of the chief negotiator from the EU, Barnier, who, according to London, pays too little time to negotiations with British colleague Dominic Raab (last week they managed to hold only a two-hour meeting). Moreover, the market has information that the parties will not have time to agree on the main issues by October, so the new “deadline” is postponed to November or early December. In other words, even in the morning the news background regarding the prospects of Brexit was negative, while about an hour ago traders saw the light at the end of the tunnel.

Immediately it should be noted that at the moment there is no detailed information about the voiced proposal of Barnier. It is only known that the conditions proposed by the EU are exclusive by nature, which are not present with any other country. One can only guess what exactly is included in the package of exclusive partnership, while the question of the Irish border is still not resolved. According to Michel Barnier, Europe will offer Britain a “Norwegian model” of cooperation, but with a number of reservations. Thus, the Norwegian domestic market is included in the internal market of the European Union, but at the same time Norway transfers a number of contributions, and is subject to the European Court of Justice. As noted by Barnier, the UK will not manage to retain all preferences for EU membership, but Brussels is ready to discuss any details of the future deal. 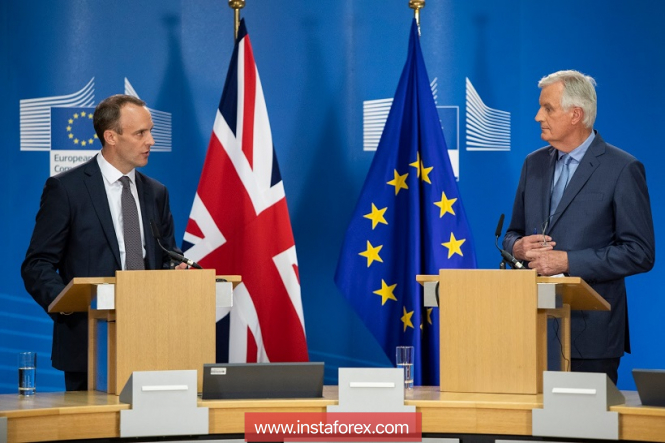 After a prolonged pessimism about the prospects of Brexit and the lack of any clear progress, traders were inspired by such rhetoric, after which the GBP/USD pair tested the 30th figure. By the way, such a rapid price dynamics suggests that the pound/dollar pair is ready for an incredibly strong upward breakthrough when an agreement between Brussels and London is reached. After all, if the pair has updated multi-week highs only on vague information about “some special offer”, then when a full-fledged deal is concluded, the pair’s growth will amount to hundreds of points in the medium-term perspective.

Wednesday’s situation, regardless of how it will be resolved in the future, should serve as a signal to those traders who “put” on the decline of the GBP/USD. Any hint of a positive outcome of the negotiations will impulsively pull the pair up, ignoring all other fundamental factors. Therefore, playing on the decline, you should never forget about the stops, as the trend reversal can occur unpredictably and swiftly.

Now consider the situation from a technical point of view. Thus, on the daily chart, the price is between the upper and lower lines of the Bollinger Bands indicator, which indicates the priority of the upward movement. Ichimoku Kinko Hyo indicator on the same timeframe has formed a “Golden cross” signal, which warns of a possible reversal of the downward trend. The first upward target is 1.3040, but it will be available only if the bulls of the pair are at least minimally fixed within the 30th figure.

This is quite a feasible task, if the officials of London do not cross out the hopes of traders on a soft Brexit. The next target of the upward movement is 1.3135, although it is too early to talk about this. In general, the upward movement is gaining strength very quickly if the market sees a real chance of a deal between Britain and the EU. Otherwise, the price of the GBP/USD on Wednesday or Thursday will return to the 28th figure.