GBP/USD: the plan for the US session on September 12. Buyers of the pound were in a difficult situation

To open long positions for GBP/USD, it is required:

Buyers of the pound failed to gain a foothold above the morning resistance of 1.3020, which led to the formation of a new market level of 1.3031, on which a further upward trend depends. Only after consolidating above this range will it be possible to expect a second wave of growth with the update of the weekly high near 1.3077 and going beyond it to the area of 1.3119, where I recommend to lock in the profit.

The support area of 1.2981 has saved the pound from falling several times, but I do not recommend that you rely on it in the second test. It is best to open long positions in the afternoon for a rebound from the lows of 1.2937 and 1.2898.

To open short positions for GBP/USD, it is required:

Sellers returned to the resistance level of 1.3020, which led to the planned selling of the pound. At the moment, the main task is to re-test and break the support of 1.2981, which can lead to a larger downward wave with the update of weekly lows 1.2937 and 1.2898, where I recommend to lock in the profit. If the data on the US is worse than economists ‘ forecasts, the weakness of the US dollar may lead to a re-test, and possibly to a breakdown in the resistance of 1.3031. In this scenario, it is best to open short positions on a rebound from the weekly high of 1.3077.

The 30-day moving average crossed from top to bottom 50-day. The price is below the moving averages, indicating a decline in the pound in the short term. 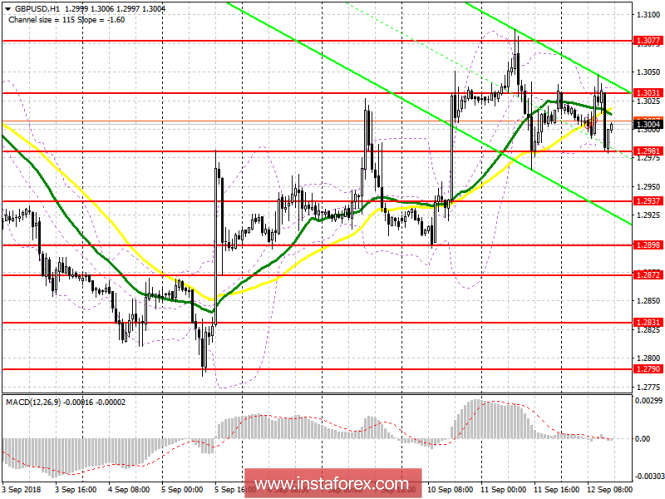