GBP/USD. The pound is waiting for parliamentary hearings on inflation

On Monday, US trading platforms are closed (Labor Day is being celebrated in the United States), so the dollar pairs are left to “themselves”, subject to the general mood of the foreign exchange market. Among traders, pessimism prevails again, which pushes the dollar towards growth against a basket of major currencies.

Speaking directly about the GBP/USD, then the downward movement is also caused by Brexit, the saga around which resembles the long-running Brazilian TV series. The storyline of this “series” is so twisted and unpredictable that traders for two and a half years and could not get used to its new twists and turns.

Let me remind you that just last week the British currency rose to the middle of the 30th figure in response to the hopes for a deal between Brussels and London. The representative of the European side made a rather unexpected statement about the “exclusive conditions” that will be offered to Britain. He also noted that the draft of the future agreement is ready for 85%, although the most controversial issues remained unresolved (most notably the issue of the Irish border). Traders who missed the positive news were encouraged to accept such rhetoric, and in my opinion – with excessive enthusiasm. Because by the end of last week, all optimism had faded away due to the absence of any breakthrough in the negotiations.

The situation worsened over the weekend, when the European Union criticized the plan of British Prime Minister Theresa May on further relations between the Alliance and London. The EU chief negotiator on issues Michel Barnier said that Brussels strongly disagrees with the key positions of the “White Paper”. For example, he reiterated that if Britain leaves the Customs Union, barriers to trade in goods and services will be inevitable. Theresa May, in turn, intends, on the one hand, to withdraw from the CU, but on the other hand – to maintain access to the single market, and with the ability to enter into transactions with third countries. Brussels, of course, refused. Other points of the road map for the future agreement also caused discontent among Europeans, not to mention the unresolved conflict around the Irish border.

In other words, the situation returned to normal, and the pound reacted accordingly: the GBP/USD pair opened the trading week with the downward gap, returning to the 28th figure. Oil was added to the fire and the extremely weak PMI index in the manufacturing sector of Britain was released. The indicator came out worse than expected today and reached the lowest level for the entire current year (52.8 points). This suggests a slowdown in production in the UK, which may ultimately affect the dynamics of the country’s GDP. Moreover, the PMI index in this area has been declining for the second month in a row, therefore it is already possible to talk about the formation of a certain trend. 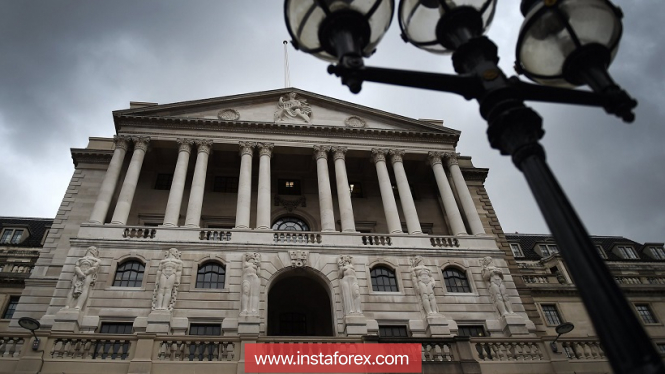 On Tuesday, the pound will again be in the zone of price turbulence. The fact is that the British regulator reports to the country’s Parliament three times during the calendar year. The agenda includes not only the prospects for inflation growth, but also the issue of monetary policy. The importance of this event is emphasized by the fact that it is attended not only by the head of the Bank of England, but also by other members of the regulator who determine the monetary policy in the country.

In total, in addition to Mark Carney, tomorrow there will be three more officials of the Bank of England – Andy Haldane, Silvana Tenreiro and Michael Saunders. Thus, traders can literally at “first-hand” learn the general mood of the regulator’s members regarding the prospects for monetary policy. For example, the recent speeches of the head of the Bank of England were extremely mild: Mark Carney actually linked the Brexit process with the actions of the English regulator. He also admitted that in case of a chaotic exit of Britain from the EU, the central bank could mitigate monetary policy by lowering the rate. If on Tuesday he repeats this thesis before the parliamentarians, the pound will be under additional pressure.

In turn, the inflation report also carries a block of important information. The English regulator will give an overview of the current situation in the country’s economy, assessing the prospects for the development of the situation in the medium and long term. Pessimistic theses of this report will undoubtedly affect the mood of the market, especially against the background of other fundamental factors.

From a technical point of view, the GBP/USD is at a kind of crossroads. On the daily chart, the price is located on the middle line of the Bollinger Bands indicator, which indicates the absence of a pronounced trend movement. But if the pair is fixed below 1.2840, then, firstly, the price will be between the average and the lower lines of the above indicator, and, secondly, the Ichimoku Kinko Hyo indicator will form a bearish signal “Parade of lines”. The combination of these signals will open the way for the pair to a strong support level of 1.2670 (the lower Bollinger Bands line on the daily chart). If representatives of the Bank of England tomorrow voiced optimistic theses of future prospects, the GBP/USD can “close the gap”, that is, will return to the level of 1.2960.