Geopolitical correction: an accurate description of the collapse of markets

Following the defeat on the stock markets of the United States and Asia on Wednesday in the red zone and European markets opened. The stock exchanges in Germany, France, and the UK are losing from 2 to 3%, the demand for defensive assets, primarily government bonds, has sharply increased, which is also reflected in a sharp drop in yields.

Such a strong fall is very similar to the long-predicted collapse, which may precede the next, even more destructive, phase of the global crisis. In 2008, in order to stop the negative trends, the leading central banks of the world actually zeroed interest rates and flooded the markets with cheap liquidity. Since the structural problems were not solved, the tightening of monetary policy, initiated by the Fed and supported by the largest central banks, leads to a new wave of crisis.

In a semi-annual IMF report published on October 10, it is noted that there is a noticeable increase in the likelihood of a broad correction in capital markets and a sharp tightening of financial conditions, which investors are not fully aware of. The head of the consulting company Eurasia Group, Ian Bremmer, spoke even more definitely. The world is entering into a “geopolitical recession”, which heralds the end of the world order under the leadership of the United States.

Large-scale sales in the markets are usually accompanied by an increase in defensive currencies, primarily the Japanese yen, and second, the US dollar. The yen has indeed strengthened across the entire spectrum of the foreign exchange market, which cannot be said about the dollar. It has slightly declined against the currency basket. The development of events suggests that in the short term, the dollar will look weaker than its competitors.

Today, the focus will be on the minutes of the last meeting of the ECB. The most interesting are the estimates of the average wage growth rate in the eurozone and related inflation.

The currency pair EUR / USD has chances to continue to grow, testing the resistance level of 1.1590 is likely during the day.

The pound continues to play rumors about the growing likelihood of a compromise in the negotiations on Brexit, macroeconomic data on this background play a secondary role. Growth is likely during the day to the level of 1.3260 and further to 1.3298.

On the whole, the Russian ruble calmly reacted both to the sharp decline in oil and to the collapse of world stock markets, which is quite unusual under current conditions. Capital outflow in the third quarter reached $ 19.2 billion, which is the maximum since 2015, and volumes direct investment in the non-financial sector.

Last week, the Ministry of Economic Development published a forecast until 2024. The government, in turn, approved the main areas of work for the same period. At the same time, the State Duma and the government are working together on the budget 2019/21. 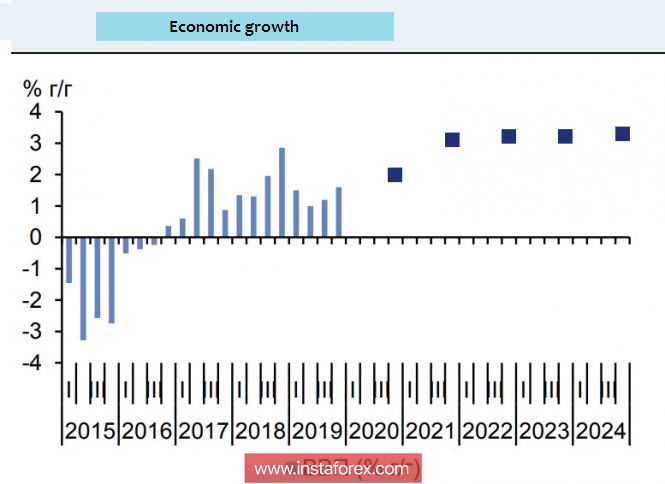 A breakthrough in GDP is planned for 2021, when a recession is possible in the United States, predicted by the inversion of the yield curve, and even the Fed’s official forecasts indicate a slowdown in economic growth. Global risks are expected to increase by this time, it is quite likely that commodity prices will fall, but the Ministry of Economic Development does not see any problems here. It is planned to change the growth model from raw materials to innovation.

The second factor, which lies in the new development strategy, is the reorientation for the next 2 years of the basis for growth from the consumer market to the investment market, which will be supported by the government. In other words, the reforms imply a decrease in consumer activity and a simultaneous increase in the flow of investments at the expense of the budget. This is an extremely ambitious task, the solution of which directly follows from the rejection of the consumer model of the economy and demonstrates the expectations of strong shocks in the global economy in the coming years.

The practical conclusion from this forecast is that the growth of investment in the economy ceases to depend critically, including on the inflow of private foreign capital. This means that the increased outflow of capital from the financial markets of Russia, according to the calculations of the government, will not lead either to economic problems or to serious pressure on the ruble.