July was the fourth consecutive month of gold closing in the red zone. The precious metal has not faced such a protracted peak since 2013. The US economy and the aggressive monetary tightening of the Fed, which gained under the influence of the fiscal stimulus, dealt a serious blow to the positions of the bulls in the XAU/USD. The futures market is almost 70% confident that the Federal reserve will raise rates twice before the end of the year amid a drop in unemployment to 4%, inflation to the target and an impressive +4.1% q/q of GDP for the second quarter. 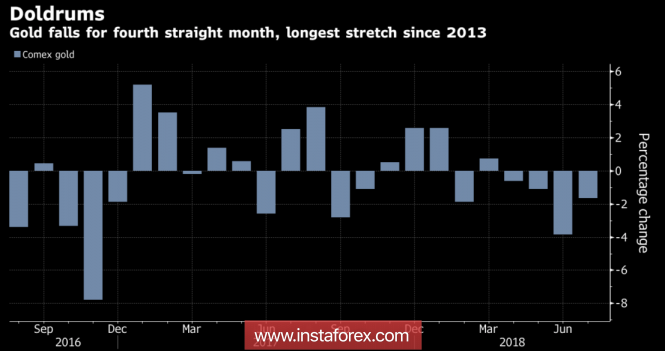 While Japanese investors kept the yield of 10-year US Treasury bonds below the psychologically important 3% mark, and the growth of US stock indices did not allow precious metals to play a role in escalating trade conflicts, a strong dollar left it no chance. Even the information from competent Reuters sources about Donald Trump’s willingness to announce the expansion of import duties for China by $200 billion was perceived as a reason for selling the XAU/USD in the near future. The dollar, for investors, seems to be a more reliable safe-haven asset than gold.

What can the precious metal answer? First, the seasonal factor can play on its side. August is the second best month for gold after January. By the end of the last month of summer 2017, it has strengthened by more than 4%, and in 2016-2017, ETF reserves added about 4%. Second, speculative net longs have fallen to a record low since the date of the accounting in 2006. They are lower than at the end of 2015, when the Fed started the process of monetary policy normalization. Finally, third, the market has serious doubts about the ability of the US economy to maintain the pace taken in the second quarter. Let Donald Trump in this no doubt, but the logic says the opposite. The gradual fading of the effect of tax reform, tightening of the Fed’s monetary policy, trade wars and the dollar’s revaluation in April-July increase the risks of a slowdown in GDP in the third-fourth quarters.

Another thing is that the main competitor of the dollar in the face of the single European currency is not shining yet. In April-June, the divergence in economic growth of the US and the eurozone turned out to be the broadest one since 2014. This does not allow us to count on the ECB’s departure from ultra-soft monetary policy and creates serious obstacles for the EUR/USD to move upwards.

In the short term, gold is likely to show increased sensitivity to the results of the FOMC meeting and the release of data on the US labor market. The Fed’s “dovish rhetoric and sluggish wage growth will push futures prices in the direction of $1,250 per ounce. On the contrary, if the central bank prefers the “hawkish” hunt, and the statistics on wages will please the eye, the precious metal risks to continue the peak in the direction of $1200. 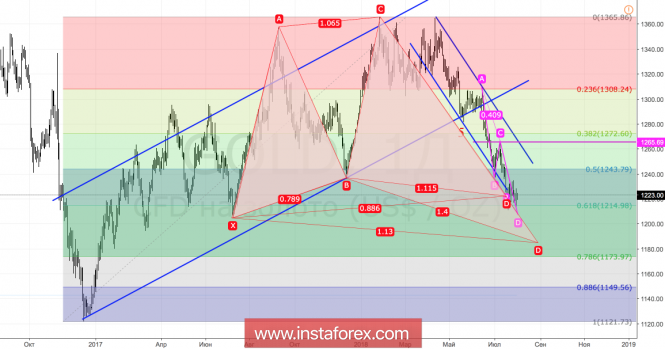