In 2018, investors faced a sharp question: does gold continue to function as a safe-haven asset or has it already lost this status? The precious metal collapsed to a year and a half low amid the escalation of the trade conflict between the US and China and the currency crisis in Turkey. Both events are capable of slowing down the second and third economies of the world, and in such conditions the global appetite for risk tends to decrease, which increases the demand for reliable assets and leads to an increase in prices for them. Gold since the beginning of the year has lost about 9% of its value. What’s the matter? Is the status of the safe haven asset in the past?

Investors got rid of ETF products. Stocks of the largest exchange-traded specialized Fund SPDR Gold Shares fell to 776.65 tons, the lowest level since February 2016. From the levels of the April peaks, the indicator lost about 11%. In general, throughout the gold ETF industry, reserves collapsed to the semi-annual low. 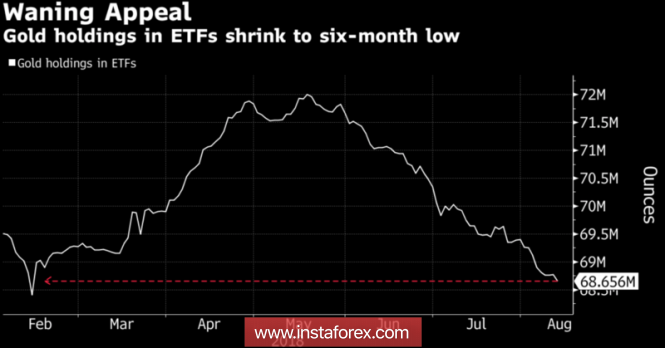 The share of precious metals in investment portfolios is declining, as it does not withstand competition with securities. Since 2009, the S&P 500 500 has added more than 320%, and asset managers at 735 billion, according to a BofA Merrill Lynch survey, believe that the United States have better opportunities to generate corporate profits compared to other countries over the past 17 years. The yield on a 10-year Treasury bond wanders near the psychologically important 3% mark. The indicator is attractive for carry traders who only in the second quarter with the help of the yen as the funding currency managed to earn on the game on the difference of almost 5%.

What to say to gold? If earlier the fire in the financial markets of China was transferred to the United States and shifted the timing of the federal funds rate increase, now this is not happening. The US economy accelerated to 4.1%, the Fed intends to tighten monetary policy four times in 2018 and three more times in 2019. As a result, the precious metal lost its status of a safe haven asset to the US dollar. It is this currency that receives the main preferences from the aggravation of the geopolitical situation in China and in Turkey.

Dynamics of the US dollar, gold and yen 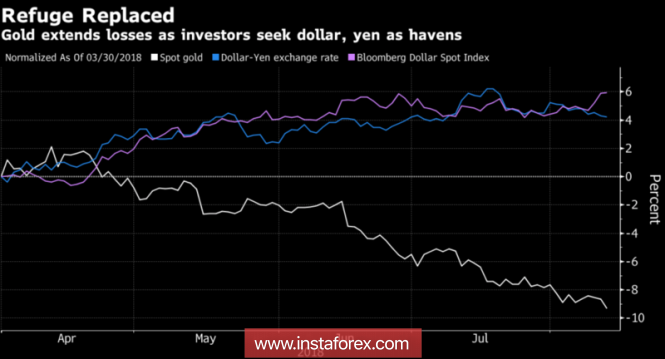 The situation for the XAU/USD is aggravated by the unfavorable political climate in the eurozone. Italy is dissatisfied with the increase in the yield of its own bonds, which increases the cost of borrowing and requires the ECB to intervene in the life of the debt market. In fact, this is a hint at the need to prolong the program of quantitative easing, which is a “bearish” factor for the EUR/USD. The share of the euro in the USD index is 57%, so the rapid decline of the single European currency pulls gold to the bottom no slower than the flight of investors from ETF.

Technically, futures for precious metals reached targets of 113% and 261.8% for the patterns “Double top” and AB=CD, which increases the risk of a rebound. If, on the contrary, the convergence zone of $1180-1185 per ounce will be passed by “bears” without much effort, the risks of continuing the peak in the direction of $1150 will increase. 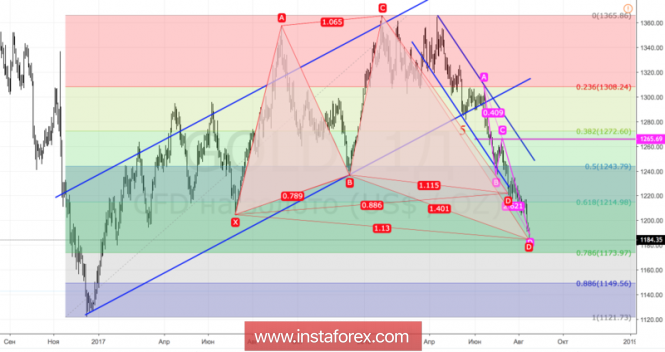