Unable to consolidate above $ 1240 per ounce, gold sharply pressed the brake and returned to the upper boundary of the medium-term consolidation range of $ 1185-1215. The positions of the US dollar remain strong, while some recovery in US stock indexes and rising US Treasury bond yields suggest that precious metal fans are too carried away with the attack.

Despite the failures of the last days, gold closes October in the green zone, which has not happened to it since March. For six months in a row, the precious metal lost its value against the background of the rally index of USD, S & P 500 and the rates of the American debt market. In mid-autumn, the bulls at XAU / USD surprised the market with their arrogance. Gold rose in parallel with the dollar, taking advantage of the fall in the global MSCI by more than 8%. The capitalization of the global stock market has decreased by $ 8 trillion, which should be taken as a deterioration of the global risk appetite, which traditionally supports asylum assets.

Dynamics of the global stock market 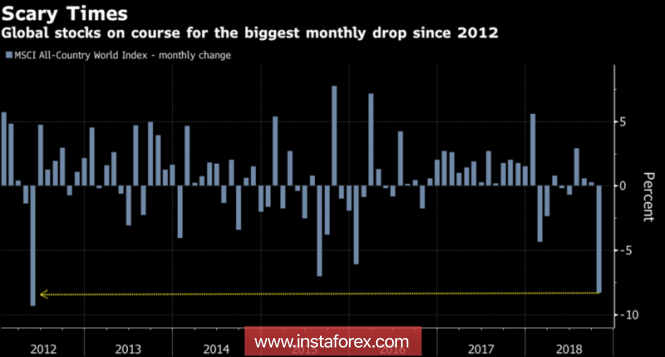 A helping hand for the precious metal was spread by rumors of a slowdown in US GDP after one of the strongest semesters in the past ten years. Say, the effect of fiscal stimulus is gradually fading away, and trade wars, revaluation, and tightening of financial conditions will increase the risks of recession. Looking at the slow pace of inflation, the Fed may slow down the process of normalizing monetary policy, which will put pressure on the dollar. It was the rapid rally of the USD index that was the main headache of the bulls on XAU / USD in April-September.

Gold is supported by increased demand from investors and central banks. The first increase purchases of ETF products, the second, its activity in the field of buying precious metals. If many are accustomed to the behavior of the Russian regulator, purchasing an average of 20 tons per month, then the exit to the market of Central Banks from Poland and Hungary looks amazing. 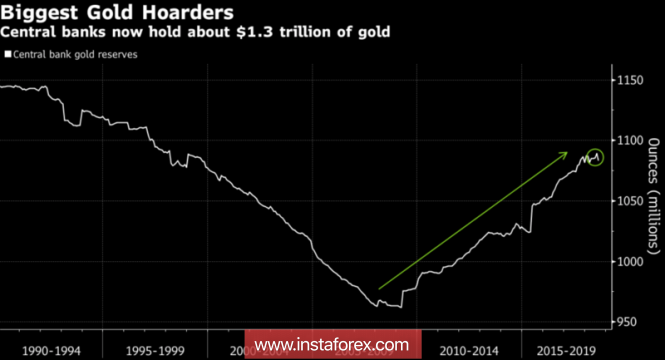 What to expect from gold in November? In my opinion, much will depend on the midterm elections to the US Congress. If Democrats control the House of Representatives, the risks of impeachment of Donald Trump will increase, which will boost the demand for safe-haven assets. On the contrary, Victoria of the Republicans will return to the table the idea of expanding the fiscal stimulus. The president intends to cut taxes for the middle class by 10% in order to prolong the dawn of the US economy. In 2019, economic expansion in the United States may be the longest in history.

Equally important will be the Fed’s worldview. If inflation continues to stagnate, the regulator will begin to reflect on the issue of a slower normalization of monetary policy than markets currently expect. This will be a negative for the US dollar.

Technically, the target by 88.6% for the Bat pattern remained unfulfilled. A necessary condition for the restoration of the upward movement is a rebound from the support at $ 1,215 per ounce.