Gold is out in the wild

No matter how hopeless against the background of a strong dollar at the beginning of October, the position of gold did not look, for an infinitely long time to ignore the favorable external background precious metal could not. Trade wars, the growing probability of slowing the GDP of China and the world economy, the uncertainty around Brexit, the Italian political crisis and, finally, the threat of Saudi Arabia to inflate oil prices to $100 per barrel in case the United States imposes sanctions, from a fundamental point of view, should contribute to the growth of demand for safe-haven assets. However, as long as the US stock market was dominated by buyers, there was little chance of gold, because this situation is regarded by investors as a high global risk appetite. Another thing is the correction of the S&P 500. In this regard, it becomes clear why the catalyst for the breakthrough by the precious metal of the upper limit of the trading range of $1185-1215 per ounce was the worst two-day collapse of US stock indices since February.

Having lost about 10% of its value since April against the backdrop of the Federal Reserve’s tightening monetary policy and the revaluation of the US dollar, gold has been stuck in consolidation for a long time. It waited in the wings and waited. Growing volatility in the US stock market is forcing investors to diversify their portfolios, increasing the share of reliable assets. And even in times of escalation of trade wars between the United States and China, it was believed that the dollar stole from the yen and the precious metal’s safe haven status, in fact, and the US currency has its Achilles heel. As soon as the S&P 500 went down, the inflow of foreign capital was replaced by an outflow, which allowed gold to mark the best daily dynamics since the referendum on Britain’s membership in the EU in 2016. 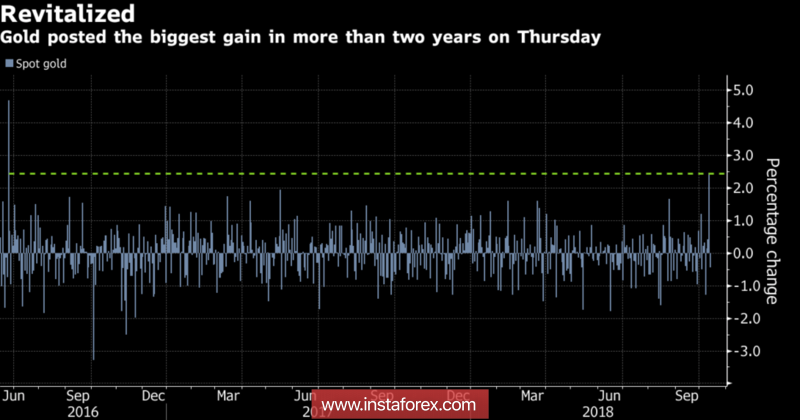 What’s next? The fate of the XAU/USD will depend on the US securities market and the position of the dollar. Despite the fact that the consensus forecast of Bloomberg experts suggests that the yield of Treasury bonds may rise above current levels by the end of the year, Barclays believes that the figure will soon fall below 3%. According to the bank, investors overestimate the strength of the American economy, and weak statistics on retail sales and inflation proves it. As for the S&P 500, the most likely scenario is consolidation. Forecasts of corporate profits for 2018 are optimistic (+23%), but it appears more modest for 2019 (+10%), with the fading effect of fiscal stimulus and trade wars will contribute to a slowdown in US GDP.

The dollar is gradually losing its trump cards. The factor of four hikes in the Federal funds rate by the end of 2019 has already been practically taken into account in the quotes of related pairs, while the decline in the rate of repatriation of capital and economic growth is negative for the bulls on the USD index. These circumstances allow us to be optimistic about the prospects of the precious metal.

Technically, the daily gold chart continues to implement the target of 88.6% on the “Bat” pattern. To begin with, the bulls need to storm the resistance at $1239-1244 per ounce. 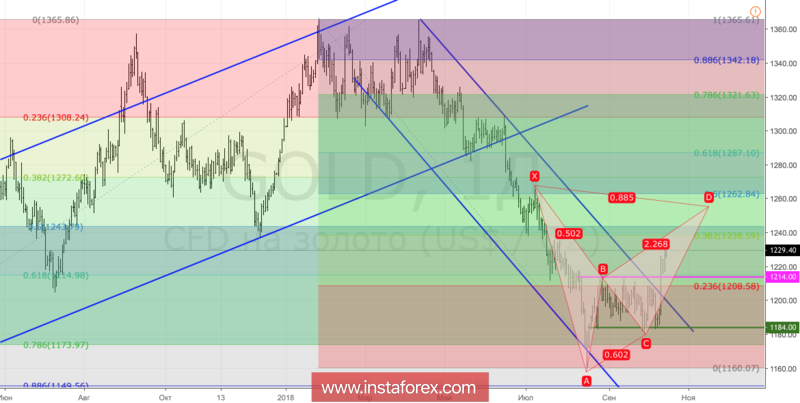