Gold is watching the dollar

The weakening of the US dollar following the results of the midterm elections in the United States became a catalyst for the strengthening of gold. The victory of the Democrats in the House of Representatives increases the risks of a political impasse associated with the problems of passing the legislative initiatives of the Donald Trump administration through Congress. Most likely, the reduction of taxes by 10% for the middle class will have to be forgotten – the Democrats are not determined to further stimulate the economy, which already looks overheated. As a result, the risks of completing the economic cycle and the tenure of the 45th president of the United States have increased, which makes the “bulls” on the USD index nervous.

In April-August, the winning pace of the dollar lowered XAU/USD quotes to the lowest levels since the beginning of the year, and only in October the precious metal managed to close in the green zone for the first time since March. We need to thank the US stock indexes, which entered a correction due to the rising cost of borrowing, concerns about the impact of revaluation on corporate income and the deterioration of the global appetite for risk under the influence of trade wars. Gold managed to get out of the trading range of $1185-1215 per ounce, but the strength of the “bulls” quickly dried up: if the Federal Reserve continues to normalize monetary policy, bond yields will continue to grow, and the presidents of the US and China will agree to put an end to the trade friction, will the precious metal develop its success? 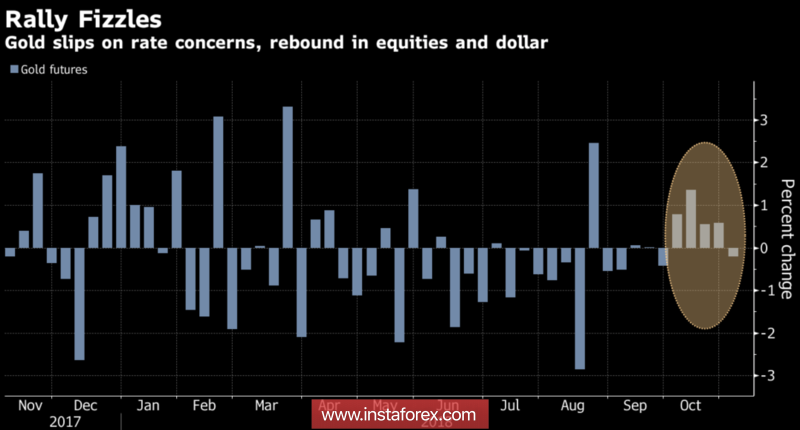 In my opinion, fans of gold should not sprinkle ashes on their head. The end of the economic cycle in the US threatens to weaken the US dollar due to the closure of long speculative positions that have reached the highest levels since the beginning of 2017. At the same time, de-escalation of the trade conflict between Washington and Beijing will be a boon to the global economy, which will ultimately push the central banks-competitors of the Fed to raise rates. The U.S. dollar index will continue to fall, and the XAU/USD to grow.

The fact that the weakness of the precious metal in April-August was temporary, is evidenced by the increased activity of central banks. They used the principle of “buy what’s cheap” and increased the volume of assets in gold and foreign exchange reserves at the fastest pace since 2015. We are talking about net purchases in the amount of $5.8 billion led by regulators from Russia, Turkey and Kazakhstan. The first two countries are faced with US sanctions, so their desire to leave the dollar in gold looks quite logical.

In general, the situation on the physical asset market is mixed. Unlike central banks, specialized exchange-traded funds in the third quarter acted as net sellers of precious metals in the amount of 116 tons, equivalent to $4.5 billion. Competent sources from Bloomberg argue that Indian imports in October fell to 38.8 tons, which is significantly lower than during the same period last year (67 tons). At the same time, the World Gold Council reports that in January-September the demand for precious metals in China increased by 5.1% yoy, to 850 tons.

Technically, a confident assault resistance at $1239 and $1242 per ounce will allow the bulls to continue the gold rally in the direction of the target at 88.6% on the “Bat” pattern. 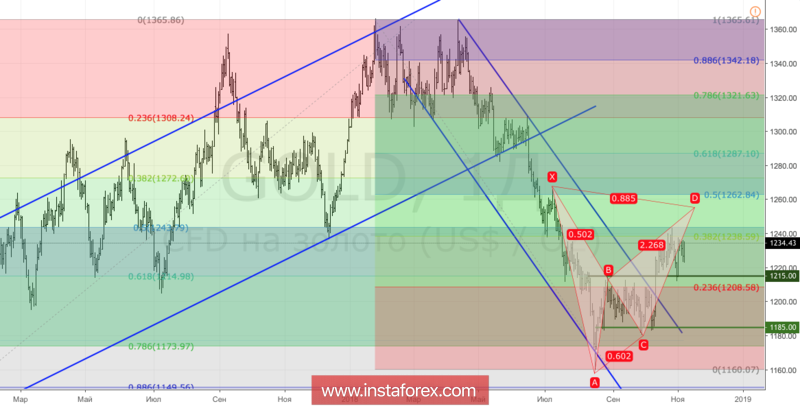