Gold: music did not last long

If someone thought that the recent success of gold suggests the end of the downward medium-term trend, then the US employment report for August became a tub of cold water. The fastest growth in average wages since 2009 increased the risks of accelerating the pace of inflation and raised the probability of four Federal funds rate hikes in 2018 at above 80%. The yield on 10-year Treasury bonds at arm’s length approached the psychologically important level of 3%, which supported the US dollar. It is the strength of the US currency that is a real scourge for the precious metal this year.

Music for “bulls” on the XAU/USD did not last for long. Speculators resumed selling of gold at the end of the five-day period by September 4. As a result, their net-short positions increase over the course of eight of the last nine weeks, which allows us to speak of a “bearish” market situation.

Dynamics of speculative positions on gold in the derivatives market 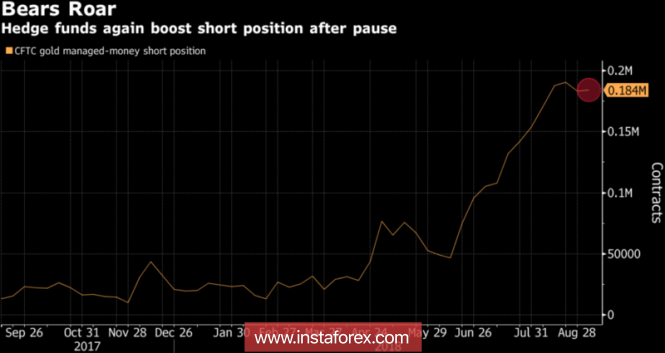 The growth of employment outside the agricultural sector by 201 thousand in August, the drop in unemployment to the lowest levels since the 1960s and +0.4% m/m on average wages are not the figures that fans of the precious metals wanted to see. Investors almost believed in the Federal funds rate hike in September and December, and even taking into account the patterns that worked in the recent past, gold is unlikely to be able to critically counterattack before the FOMC meeting on the 25th-26th. We are talking about the fall of the XAU/USD on the eve of historical meetings of the Fed, ending with the tightening of monetary policy, followed by the restoration of positions after important meetings.

Along with the monetary tightening of the Fed, the pressure on the analyzed asset is caused by trade wars. Donald Trump tortured markets with threats of expanding import tariffs first by $200 billion, and then another $267 billion if necessary. If this happens, the total amount of tariffs, taking into account the ones that have already been introduced, will be $517 billion, which is more than all the deliveries of goods to the US from China in 2017 ($505 billion). The dollar took away the position of the safe-haven asset from gold, so the escalation of the trade conflict is considered as a “bearish” factor for the XAU/USD.

What’s next? Investors should closely monitor the release of data on consumer prices in the United States. According to the consensus assessment of Bloomberg experts, by the end of August they will slow down from 2.9% to 2.8% y/y, core inflation will continue to grow at the same rate of 2.4% y/y. If in fact it turns out to be stronger data, “bulls” on the USD index will get another reason to attack. Gold, on the contrary, will be forced to retreat. However, if inflation turns out to be sluggish, then the initiative is already taken by the “bulls” of the XAU/USD.

Technically, on the daily chart of the precious metal, after reaching the targets of 88.6% and 261.8% on the “Double Top” and AB=CD patterns, it was followed by a natural rollback and consolidation in the range of $1184-1214 per ounce. Breaking the upper limit of the “Shelf” of the “Splash and Shelf” pattern will increase the risks of a correction to $1240 and above. On the contrary, a successful storm of support for $1184 will open the way for the “bears” to the south.