If the assets that have been marching in different directions for a long time begin to move in the same direction, there is a reason for bewilderment and search for the causes of what is happening. It turns out – you can find a good investment idea. Over the past few months, the main driver of the weakness of gold was the strong US dollar. Nevertheless, the political crisis in Italy increased the demand for safe-haven assets and contributed to selling the EUR/USD. At the same time, it played the principle of “when everyone sells, there is a great opportunity to buy.” At the auction on October 2 at the beginning of the US session, the volume of operations within 10 minutes exceeded the average 100-day indicator by more than 12 times. While the crowd was selling the precious metal, sincerely hoping for a strong dollar, the big players, on the contrary, bought it. Bottoms up? 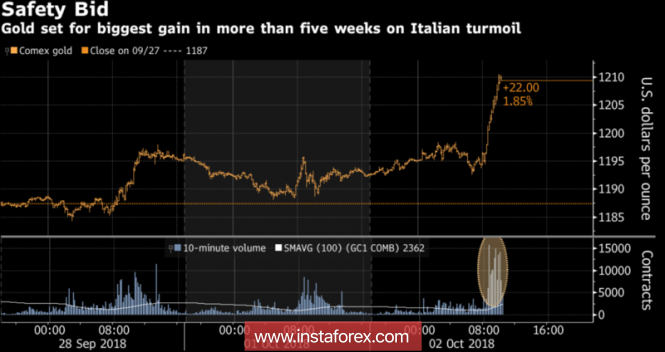 According to Commerzbank, gold will surely move upwards in the direction of $1,300 per ounce, since the external background is favorable for it. First, the increase in the scale of trade wars leads to an acceleration of inflation, which at the current rate of normalization of monetary policy of the Federal Reserve will reduce the real yield of US Treasury bonds. This factor is bullish for the XAU/USD. Secondly, Brexit and the political crisis in Italy, along with trade wars, lead to a slowdown in business activity around the world. This slows down the growth rate of the world economy and delays the central banks’ plans to normalize monetary policy. The profitability of the global bond market is falling, and gold is growing. Finally, thirdly, blazing Rome increases the demand for safe-haven assets.

The eurosceptic government persuaded Finance Minister Giuseppe Tria to adopt the draft budget for 2019 with a deficit of 2.4% of GDP. Their predecessors talked about 1.6% in 2018 and 0.8% in 2019. The current plan needs to be coordinated with the EU, which is already beginning to show discontent. So, Jean-Claude Juncker said that Brussels should do everything possible to avoid a new Greece. This time in Italy. Indeed, if the European Union accepts the figures proposed by Rome, the rest of the participating countries will begin to express dissatisfaction, which will strengthen the position of eurosceptics in the eurozone. On the other hand, it is necessary to find a common language with Italy, because from the side of the League and the Five Stars from time to time there is talk that the republic would be better without the euro.

Thus, the political crisis in Europe, trade wars and growing risks of falling real bond yields amid accelerating inflation and declining growth rates of business activity have contributed to the rise of gold towards the upper limit of the medium-term trading range of $1184-1214 per ounce. Speculators did not play the least role in this process. In my opinion, the external background is favorable for the precious metal, which increases the probability of breaking the upper limit of consolidation.

Technically, the output of gold outside the trading border will increase the risks of implementing the target by 88.6% using the “Bat”pattern. 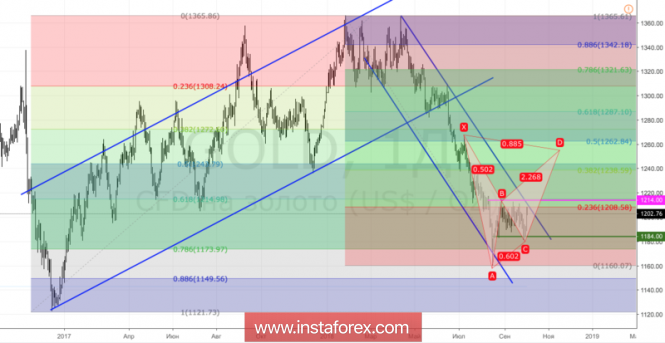