The fastest intraday gold gain over the past five months, against the backdrop of Jerome Powell’s speech in Jackson Hole, forced the market to rack his brains over the question: from what level will the speculators start fixing profit in short positions en masse? Their net shorts by the end of the week by August 21 increased to 90 thousand contracts. Commerzbank notes that over the past few weeks, long positions have remained virtually unchanged, while short positions grew. The speech of the FRS chairman squeezed a part of the “bears” from the market. From what levels will the others run?

From January’s highs, gold lost about 11% of its value and speculators continued to actively sell in April-August against the backdrop of the strengthening of the US dollar. The latter took away from the precious metal the function of the asset-refuge and grew rapidly during the escalation period of trade conflicts between the US and other countries. At the same time, the divergence in economic growth and the monetary policy of central banks played into the hands of the “bulls” at the USD index. The Fed raised the federal funds rate, and the US GDP grew by 4.1% in the second quarter. Gold fans found it difficult to counter something to their opponents, which led to the growth of net shorts to record highs.

Dynamics of speculative positions on gold It did not receive support from the precious metal from the side of physical demand. Along with the drop in ETF stocks to the lowest level since 2016 and the reduction of Chinese net imports from Hong Kong to 44 tonnes in July, which is the worst monthly indicator since the beginning of the year, bad news came from India. Heavy rains and floods inflicted $ 3 billion damage to local farmers, which is this class of buyers that is most active in the Diwali wedding season.

Since mid-August, the situation began to change. Donald Trump confused the dollar bulls with comments about his dissatisfaction with the activities of Jerome Powell as chairman of the Fed, to which the latter responded with “dovish” rhetoric in Jackson Hole. The head of the Central Bank is confident that inflation will not go far above the 2% target, and therefore it is not necessary to raise the federal funds rate aggressively. After his speech, the dollar fell out of favor, marking the worst weekly dynamics since February. On the contrary, the bulls on XAU/USD came to their senses after the knockdown.

I do not think that the dollar’s positions are hopeless. The extent of the trade conflict between the US and China did not declined entirely. The chances of the four monetary restrictions in the FRS this year are still high (74%), the leading indicator from the Federal Reserve Bank of Atlanta signals a 4.6% increase in US GDP for the third quarter. The market turned out to be too emotional for the performances of the White House and the chairman of the Federal Reserve, but gradually calmed down. According to RBC Wealth Management, only a break of $ 1225 ounce will launch an avalanche of mass closure towards speculative short positions.

Technically, the necessary condition for continuing the rally is the ability of the bulls to gain a foothold above the 1209 mark. 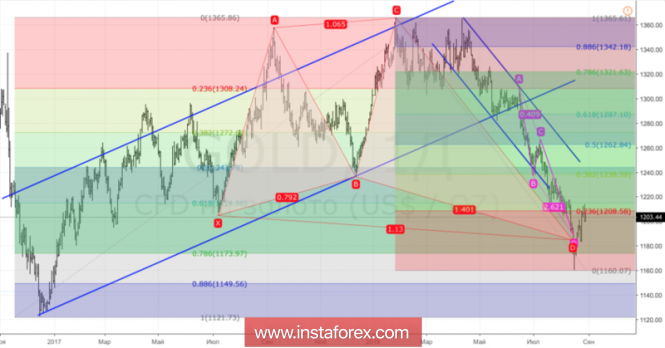