Gold wings have been clipped

August turned out to be the fifth consecutive month of gold closing in the red zone. The precious metal lost more than 2% amid the acceleration of the US economy, increasing the chances of four acts of monetary tightening of the Federal Reserve in 2018 and tensions over trade wars. And only moderately – “dovish” rhetoric of Jerome Powell in Jackson hole allowed the “bulls” to lick some of its wounds and try to break above $1210 per ounce. Alas, the joy of buyers was short-lived. In early September, the dollar began to recover in the face of problems in the negotiations between the United States and Canada and Donald Trump’s intentions to expand the size of import duties against China by $200 billion.

The dynamics of gold 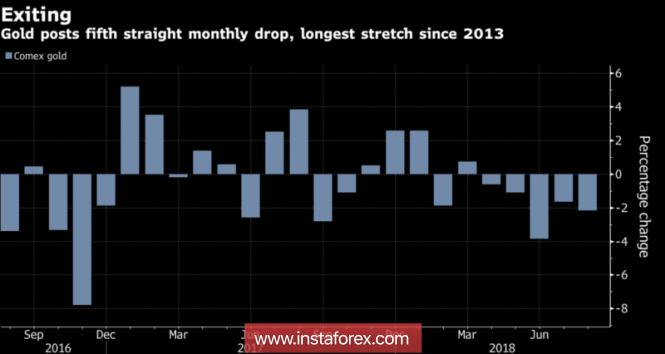 According to Citigroup Global Markets, investors do not need the gold in a world where stocks and bond yields are rising. The precious metal does not bring dividends and interest as equity and debt securities, and its status as a safe-haven asset has been taken away by the US dollar. As a result, speculators are increasing net short positions on the precious metal for the fifth week in a row and brought them to record highs. The stocks of the largest specialized fund SPDR Gold Shares fell to its lowest levels since November. From the levels of April highs, the index has lost 14%.

However, everything in this world is relative. Silver feels much worse than gold, the loss of which is about 16% since the beginning of the year. Due to the high proportion of industrial use in aggregate demand, this metal is more vulnerable to a slowdown in the global economy than the sector leader. As a result, their ratio has soared to the highest levels since the global financial crisis.

Dynamics of the ratio of gold and silver

Further dynamics of the XAU/USD will entirely depend on the US dollar, whose position looks strong. First, the Atlanta Federal Reserve predicts that US GDP in the third quarter will accelerate to 4.6%. Secondly, the futures market estimates the probability of four Federal funds rate increases in 2018 at 75%. A month ago, the figure was only slightly higher than 60%. Third, Trump is about to expand the size of import tariffs against China, which will increase the risks of a slowdown in the Chinese economy and put pressure on the markets of developing countries.

What can save gold from the sixth consecutive month of closing in the red zone? Correction in the US stock market, verbal intervention of Donald Trump, the deterioration of macroeconomic statistics in the United States and, finally, a breakthrough in the relationship between Washington and Beijing. So far, three of the four above events seem unlikely, and the rhetoric of the US president tends to put pressure on the dollar only in the short term. In this regard, sales of the XAU/USD on growth remain valid.

Technically, the inability of the bulls to hold gold prices above $1209 per ounce indicates their weakness. The initiative moved to the “bears”, which broke through the lower border of the short-term upward trading channel and intend to restore the downward trend. 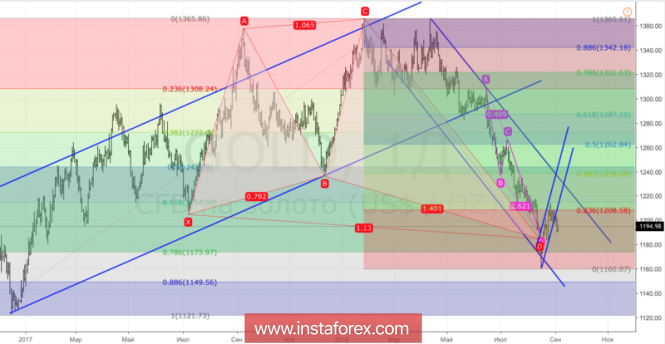