Intraday technical levels and trading recommendations for EUR/USD for July 4, 2018 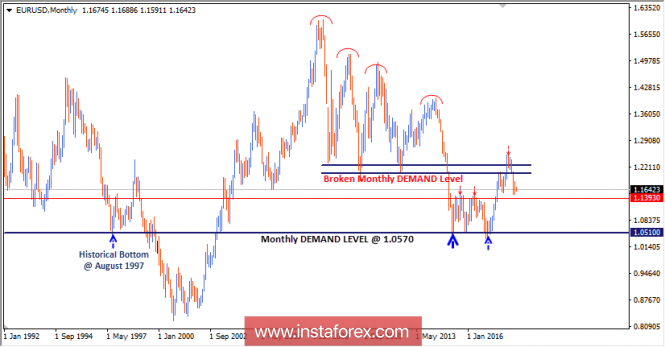 In April 2018, the short-term outlook turned to become bearish when the EUR/USD pair maintained trading below the broken uptrend as well as the lower limit of the depicted consolidation range.

The price zone (1.1850-1.1750) offered temporary bullish rejection towards 1.1990 where a descending high was established. However, the EUR/USD bulls failed to pursue towards higher bullish targets.

Instead, further bearish momentum was expressed in the market.

Recently, the price zone (1.1850-1.1750) offered significant bearish rejection and a valid SELL entry. Bearish target around 1.1520 has already been reached.

The price zone of 1.1520-1.1420 was considered a prominent bullish demand where a valid bullish BUY entry was offered during previous weeks’ consolidations.

Initial Bullish target levels were located around 1.1750. However, the significant bearish pressure was applied around 1.1700 which led to the current bearish decline again towards the price level of 1.1600.

Hence, the EUR/USD pair remains trapped inside a consolidation range between the depicted key-levels 1.1520 and 1.1700 until a breakout occurs in either direction.

A bearish breakdown below 1.1520-1.1420 might occur if enough bearish pressure is applied. This would potentially enhance further bearish decline towards 1.1270 (recent consolidation range and demand level).