Canuck begs at will (Demo)

Over the past month, the Canadian dollar has risen by 1.5 per cent against its American namesake, which allowed him to enter the top three G10 for the above-mentioned period. If not% 12-13 pique Brent and WTI, it would be possible to ignore this fact, however, the growth of neftezavisimoj currency during periods of black bear market gold evokes the sensation of nonsense. Falling export earnings and tax revenues should theoretically affect the currency exchange rate, however, the "Loonie" is growing. What's the deal?

First you need to understand that price developments in commodity assets is far from the only factor of price formation. This process is run by money, more precisely the preference of investors seeking to protect their capital and cash in on it. In this respect, the stability of United States debt market rates in the face of accelerating global economy makes Americans look more attractive than local assets. And bonds of Countries in a context of ever maple leaf improve macroeconomic statistics and "jastrebinoj" rhetoric BoC may be a useful alternative.

Stephen Poloz, and his colleagues have made it clear that the current level of overnight rates is the bottom. Will continue to increase. As a result, the derivatives market has increased the chances of monetary tightening over the next 12 months from 20% to 70%, which returned interest of investors to the "Loonie". Could it be otherwise, if speculative net long positions on futures market back in late may reached a peak over the last 5 years? With this strong labour market statistics and retail sales on the contrast with u.s. data allowed quotes USD/CAD crumble to the applicable minimum.

However, the State and Country have a maple leaf and something in common. We are talking about slowing down inflation. In may, the growth rate of Canadian consumer prices fell from 1.6% to 1.3%, core inflation-from 1.1% to 0.9%. About a tightening of monetary policy might be involved?

Despite the fact that "Loonie" fairly quickly restored the losses suffered after the CPI data release, the factor of care indicator from target revived "bears". So, ING believes that the USD/CAD will return within three months, to $1.36 against the backdrop of falling oil prices and the gradual deterioration of the macroeconomic statistics on the country of maple leaf.

In my opinion, many centrobankam in the coming years will have to make a choice between acceleration and sluggish GDP inflation and raise rates. In this regard, the slowdown in CPI is not a reason to stop buying the "Loonie".

Technically, the fate of the USD/CAD will depend on the ability of the "bears" test the diagonal support in the form of the bottom border of the rising trade channel. It is located near the mark of 1.32. The success of this event will contribute to the restoration of the downward trend and increase risks of reaching target at 113% pattern "Shark". It is located near the mark of 1.289. 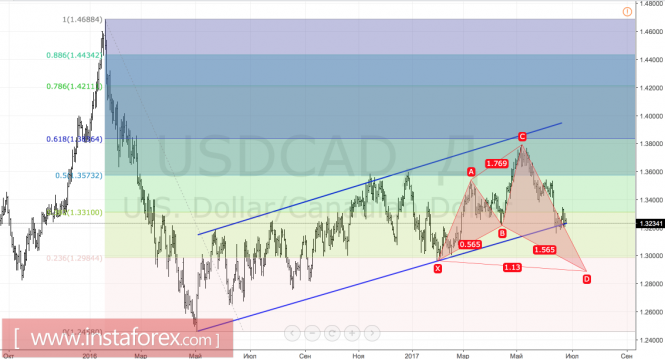