Markets are afraid of the spread of the Turkish debt crisis

On Thursday, the world markets were again plunged into a state of shock. The news that the head of the Central Bank of Turkey is resigning, indicates that problems in the financial system of this country could not be avoided and the risk of spreading the crisis to Europe is greater than ever.

On Thursday, all the market’s attention was drawn to the outcome of the negotiations on the North American Free Trade (NAFTA) between the US and Canada. This supported the positive mood in the markets, as its participants hoped for the conclusion of this treaty and the resolution of the problem of trade confrontation throughout the North American continent. But news on this account did not come, but the news from Turkey reminded market players that the risk of a financial market collapse in Europe is very large.

On this wave, and also due to weak data on the business climate in the euro area, which fell to 1.22 points from 1.30 points in August and strong values of the basic index of personal consumption expenditure (RFE) in the US, which grew year-on-year to 2.0% , which is the target level, and in monthly terms by 0.2% in July against growth in June by 0.1%, investor sentiment deteriorated significantly, which led to a drop in stock indices and a noticeable demand for defensive assets, including, of course, the US dollar.

The yield of the benchmark of 10-year Treasuries dropped sharply on the wave of purchases of US Treasury bonds from the opening level of 2.880% to 2.859% at the close of trading on Thursday. The Swiss franc continued to strengthen against the euro and the US dollar, and the Japanese yen also began to grow. In general, we can say that the markets once again remembered the fragility of the current situation in the world economy, which is exacerbated by the destructive position of the United States.

Assessing the high probability of continuing the unwinding of the Turkish topic, one can say that it is necessary for this situation to pay attention to defensive assets such as the Swiss franc paired with the euro and the dollar, the Japanese yen against the dollar and the US dollar itself against other major currencies, and especially to the currencies of emerging economies.

The currency pair AUD / USD is trading above the level of 0.7245, breaking out of the triangle. It continues to be pressured by a drop in investors’ interest in emerging market currencies, as well as a reduction in the overall demand for the purchase of risky assets. If such sentiments remain today, then the pair after overcoming the level of 0.7245 may fall to the local mid-August low of 0.7200.

The currency pair EUR / USD is trading above 1.1650. Its growth is hampered by concerns about the spread of the Turkish debt crisis to Europe. Maintaining these sentiments will lead to a downward turn of the pair, and after falling below the level of 1.1650 it may fall to 1.1600 with the prospect of further local decline towards 1.1530. 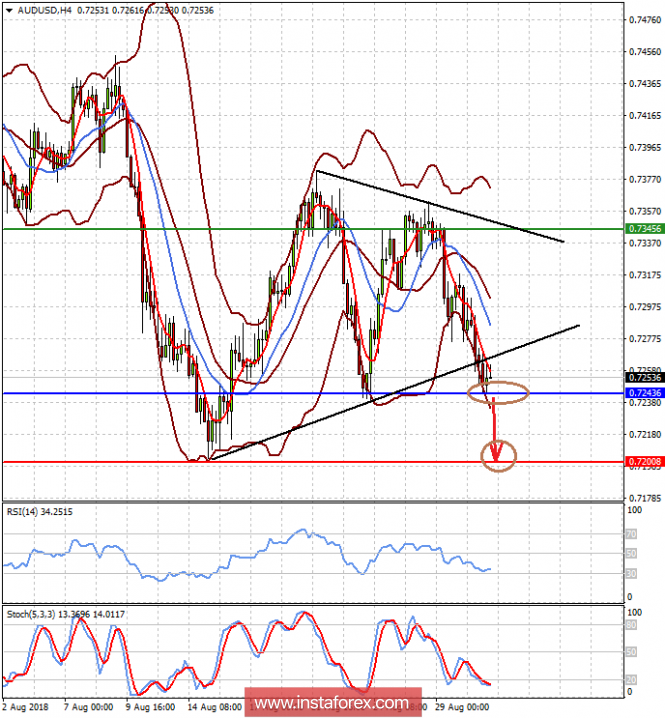 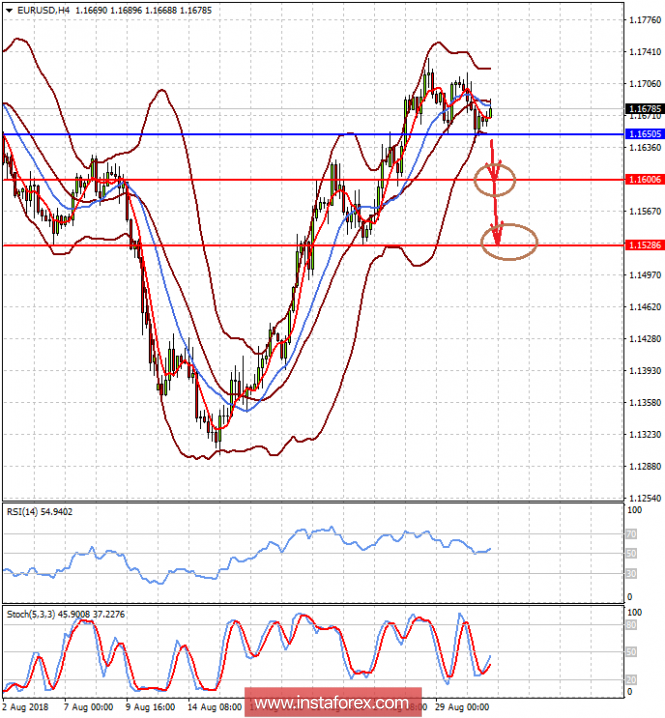