Markets doubt the strength of the dollar

The indicator of Sentix investor confidence declined in September to 12p against 14.7p in August, which was significantly worse than the experts’ expectations.

Europe is largely affected by the pressures on emerging markets, as it jeopardizes trade and production due to a decline in export capacity. There was also the worsening of the political situation and growing tension with the US, which require Europe to curtail a number of economically viable projects with Iran and Russia, as well as make unilateral concessions in bilateral relations. We should also pay attention to what usually remains beyond the scope of attention – the change of indices in other countries of the world, and they have the same tendency – a slowdown. In the US, the index fell from 25.6p to 23.6p, with a high level of assessment of the current state but the expectations went to the negative zone, down to -10p. In Japan, there’s the decline from 13.2 to 12.3p while there was a strong decline for Latin America as well with the overall global investor confidence index falling from 15.2p to 10.7, which is a two-year low.

The trend indicates a probable increase in demand for defensive assets, in particular for the yen and the US dollar.

The main event of the week in the euro area is the ECB meeting on monetary policy on Thursday, September 13. Since the beginning of the week, the euro continues to try to grow, not paying attention to the strong data on the US labor market. The threat that Draghi will drop the euro exchange rate at a press conference after the meeting is growing. To do this, we do not need to do anything special, we just need to outline the real situation in the euro area, which is worsened by a number of regional crises and heavy trade negotiations with the United States.

Today, the EURUSD does not have an explicit direction. The short-term bullish momentum may end in the resistance area 1.1640, the euro below is limited by support 1.1550. The chances to go beyond the limits of the range are not large.

The pound responded positively to the excess of GDP growth over forecasts, as the probability of recession has decreased.

For 6 consecutive quarters, GDP growth did not exceed 0.4%, but the latest data show that in May-August the growth was 0.6%. The same result was received by NIESR in assessing the growth in the last 3 months. Despite the fact that the markets do not expect to raise rates before the Brexit situation is resolved, the pound is growing, intending to exit the oversold zone.

At the same time, industrial production has no positive dynamics. The growth in July was only 0.1%, on an annualized basis, the slowdown in growth rates from 1.1% to 0.9%, that is, GDP recovery is primarily due to construction and services sector. 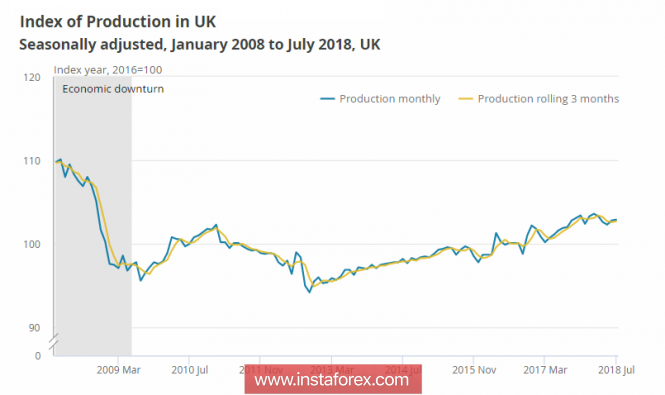 Today, data on the labor market will be published. The forecasts are optimistic. It is expected that the average wage growth will be confirmed at 2.4%, the excess of the forecast can throw a pound significantly higher, as it will give May government additional trump cards in domestic battles.

On Thursday, the Bank of England will hold a regular meeting. Since it will not be accompanied by the publication of updated macroeconomic forecasts, the chances for a change in monetary policy are regarded as minimal.

The GBPUSD has overcome the maximum of August 1.3043, the chances of continued growth during the day are not bad. If the data on the labor market exceed expectations, the pound will make an attempt to rise to 1.32.

Brent is preparing to re-storm the level of 80 dollars per barrel. The situation on the oil market is clearly bullish, the growth in demand is much higher than the supply.