Futures for the North Sea variety lost about 9% of its value in October against the backdrop of an increase in production by the largest producers, fears of a slowdown in global demand and “bearish” news from the United States. In a market where an imbalance of 1-2% of global consumption is able to change the trend, sellers have recently dictated their will. Strong positions of the US dollar play an important role in the development of a correction.

According to the estimates of Refinitiv Eikon, September oil production by the three largest producers in the face of Russia, the US and Saudi Arabia for the first time in history will exceed 33 million b/d, which is about a third of the global figure. Increased activity shows Riyadh, which wants to avoid sanctions for the murder of a journalist and is led by Donald Trump, who is calling for increased production of black gold, is showing increased activity. At the same time, the Iranian factor does not frighten investors as it used to. Potentially, due to US sanctions, the exports from this country may be reduced from 2.5 million to 1 million b/d, however, as the data show Tanker Trackers, during the first three weeks of October, it stood at 2 million b/d. This fact calms the nerves and allows the bears for Brent and WTI to develop a correction.

At the same time, the United States continues to receive negative news for black gold. According to a report from Baker Hughes, the number of drilling rigs increased to 875 in the week of October 26, which is the highest figure since March 2015. According to Bloomberg experts, US reserves of black gold will grow for the sixth week in a row. This time for 3,11 million barrels.

The dynamics of the US oil reserves 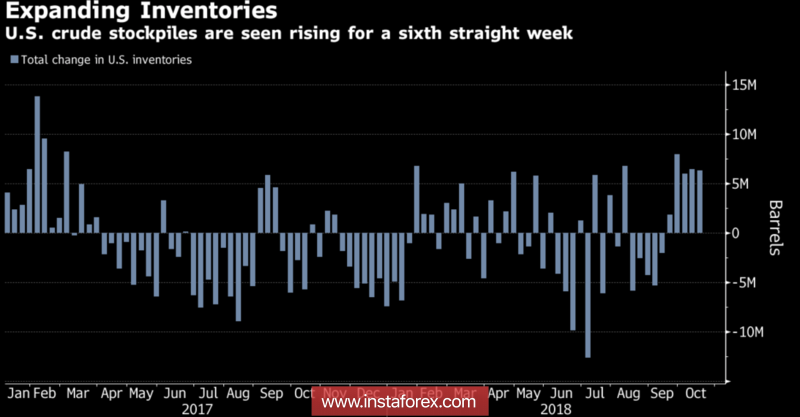 The “bearish” factor for oil is the results of the presidential elections in Brazil. The victory of the far-right candidate increases the risks of expanding access to natural resources of the country’s private capital. This in turn threatens to increase the production of black gold to over 5 million b/d. Brazil is the fourth largest producer in the world, ahead of Iraq.

According to the International Energy Agency, oil prices that are too high threaten the world economy and global demand. Despite the decline in October, the cost of Brent has increased by 15% since the beginning of the year. At the same time, the worst month for US stocks since 2009 reinforces fears about the slowdown of the US economy. Goldman Sachs believes that the probability of a recession in the next two years is 50%, which should be regarded as a negative for global oil demand. If we add the strong position of the US dollar to the factors mentioned above, the risks of developing a corrective movement in the North Sea variety appear to be quite substantial.

Technically, the level of $76.7 per barrel (23.6% of the upward long-term wave), as expected, was a serious obstacle to the “bears”. Only its overcoming with a subsequent break of the lower boundary of the ascending trading channel will allow the “Splash and reversal with acceleration” pattern to be realized. 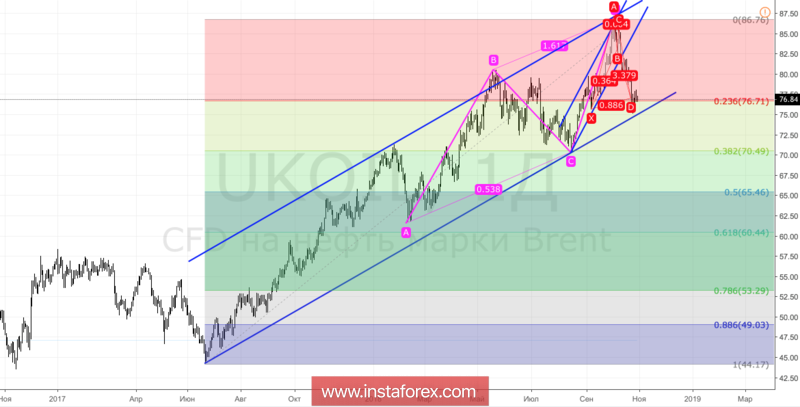