Yesterday, we witnessed that investors do not believe in the prospects of a single European currency. European analog of the dollar so famously left from side to side, that already captured the spirit. The rapid downward movement began, in fact, from scratch. Participants in the mass sale market noted the publication of ZEW research, which usually does not have a significant impact. First came out data on Germany, where the sentiment index in the business environment fell from -16.1 to -24.7, and the index of assessment of current economic conditions decreased from 80.6 to 72.4. The single European currency immediately began to lose its positions, and this trend only intensified when it became known that the index of economic sentiment in Europe fell from -12.6 to -18.7. From the indices themselves, we can conclude that European business is looking to the future without much enthusiasm. Well, the market reaction shows that investors do not see any prospects of investing in the European economy.

However, already towards evening, everything returned to where it began. This is due to two news from the US. The first was data on open vacancies, the number of which fell from 6,840 thousand to 6,638 thousand, and, given the recent data on unemployment, a reduction in the number of open vacancies suggests that it is not yet worth waiting for the decline in the unemployment rate. On the contrary, the probability of its further growth is high. Well, the second news was the statements of Donald Trump. The US President once again told the Europeans that they do not fulfill their obligations on NATO, or rather spend too little on maintaining a military alliance. The forty-fifth president of the USA asked a direct question about when Europeans intend to compensate the US for losses. That is, Donald Trump once again invoices Europe for payment. Also, Americans saw few of the duties they imposed on goods from China for a total of $ 50 billion, and they decided to expand the list of goods by another $ 200 billion. And everyone understands that the response will follow and they do not bear anything good for American business.

Today, there are data on producer prices in the US, whose growth rates should accelerate from 3.1% to 3.2%. On the eve of the publication of inflation data, this is a pretty good result, as it confirms the assumptions of market participants that inflation in the US continues to grow. True, the growth rate of average hourly wages is lower than inflation, so this can lead to a decrease in consumer activity. However, it is this development that may force the Fed to double the refinancing rate twice before the end of this year. So, the acceleration of the producer price growth rates will be welcomed with optimism. Also, the enthusiasm for the Fed being able to raise the refinancing rate much more action will allow ignoring data on commodity stocks in wholesale warehouses, which should grow by 0.5%. But the reserves have been growing for several months in a row.

High probability that by the end of the day the euro will fall to 1.1675. But this is only if the forecasts for producer prices are justified. If they suddenly start to decline, then it is worth waiting for the growth of the euro to 1.1800. 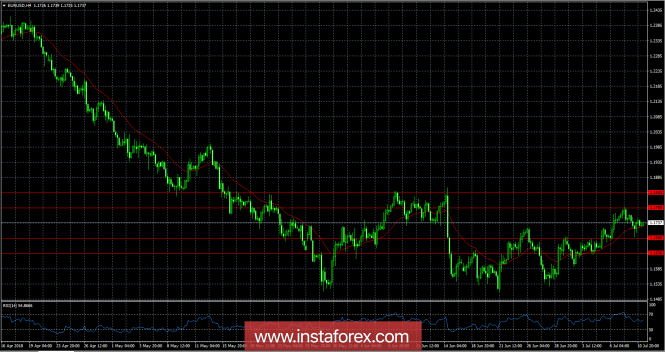