The British pound on Monday succumbed to the influence of the euro, but grew by less than 22 points. The growth was stopped by the resistance of the trend line on the daily chart and the expectations of the meeting of the Bank of England on Thursday. The market probability of raising the rate at this meeting is 90%. Such a high probability (determined by futures on rates) causes bewilderment. The Bank of England did not give instructions for raising the rate at this meeting, and traditionally, there are no false signals, even the Fed and the ECB switched to a clear communication. The Bank of Japan stands alone. A small optimism pound gave yesterday the growth of lending, private individuals in June were issued 5.4 billion pounds against expectations of 5.3 billion pounds. 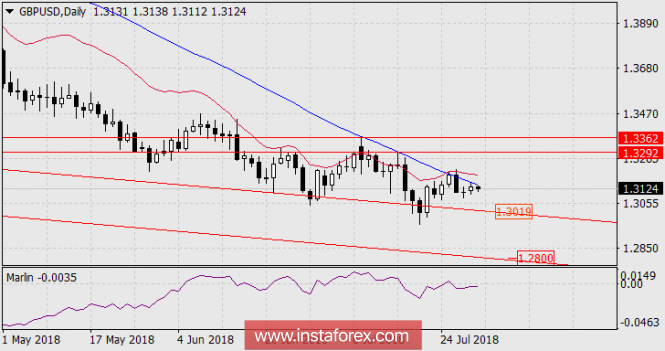 Today, important data will be released in the United States. Personal incomes of consumers in June are expected to grow by 0.4%, expenses also by 0.4%. Business activity in Chicago is expected to decrease from 64.1 to 61.9, consumer confidence for the current month is expected to increase slightly from 126.4 to 126.5.

We are waiting for the price reduction to support the trend line 1.3019, after which, following the meeting of the Bank of England, the decline to the next support at 1.2800.