Positive news from the US will support the dollar

Trades in Europe on the stock markets are on a positive note. It seems that the “duck”, launched by the Bloomberg news agency announced that some ECB members consider it necessary to raise interest rates before the end of 2019. Some investors are convinced of this.

It is known that the media, including specialized ones, such as Bloomberg or CNBC, manipulate the markets, throwing in either unverified news or openly false, which leads to significant movements in world markets in general and in foreign currency in particular. A similar picture occurred during the wave of the above-mentioned news. Against this background, the euro was supported and sharply higher against the US dollar. This was also facilitated by the publication of positive data from Germany.

According to the data provided, the volume of industrial orders rose sharply by 2.6% in May against expectations of an increase of 1.1% in April. Although it was an upward revision, it came out negative at minus 1.6%. Yet, the growth of the Euro against this background was limited. iven the general picture that has developed in the markets so far, we believe that the euro has no growth potential on domestic news, as the ECB’s position on the prospects for changing the course of monetary policy remains the same and soft. In addition, the instability of the political situation in the Fed should be taken into account, despite the fact that Chancellor Merkel has managed to extinguish the fire of discontent with her policy in the government coalition. Considering this, we consider it necessary to sell the euro for a significant growth, primarily against the US dollar.

Today, all market attention will be turned to the release of data on employment in the private sector from ADP, as well as, to the index of business activity in the non-manufacturing sector (ISM) in the United States. It is expected that the US economy will get 190,000 in June against the growth of 178,000 in May. the value of the index of business activity in the non-production sector will drop to 58.3 points in June against the value of 58.6 points in May. In addition, of course, it will be interesting to publish the minutes of the June Fed meeting on monetary policy. If he confirms the firm desire of the regulator to raise interest rates this year four times, rather than three, as previously thought, it could push the dollar to local growth resumption.

The EUR / USD pair declines after sharp speculative growth. A drop below 1.1690 could lead to a further drop in to 1.1600 amid positive news from the US.

The USD/CAD pair is above the level of 1.3125. The decline will be resumed if the data on oil reserves in the US show a noticeable drop. Overcoming the level of 1.3125 against this background may lead to a decline towards 1.3050. 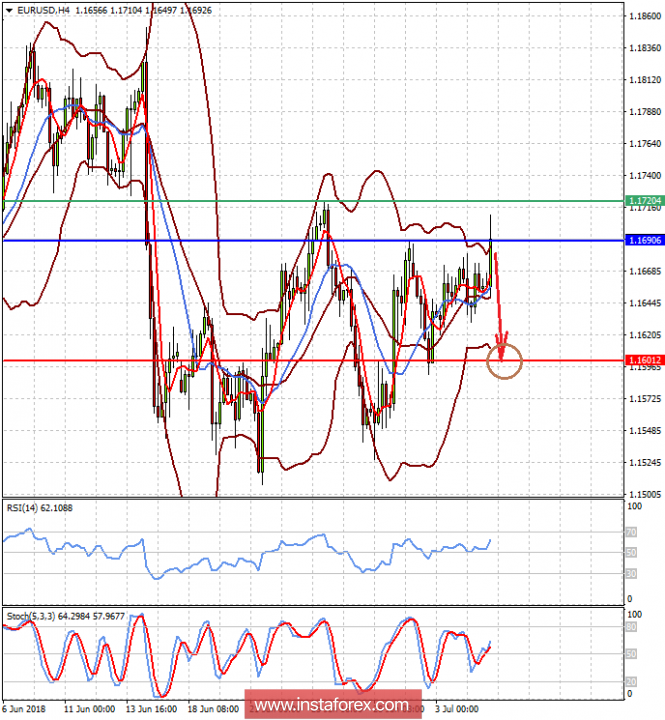 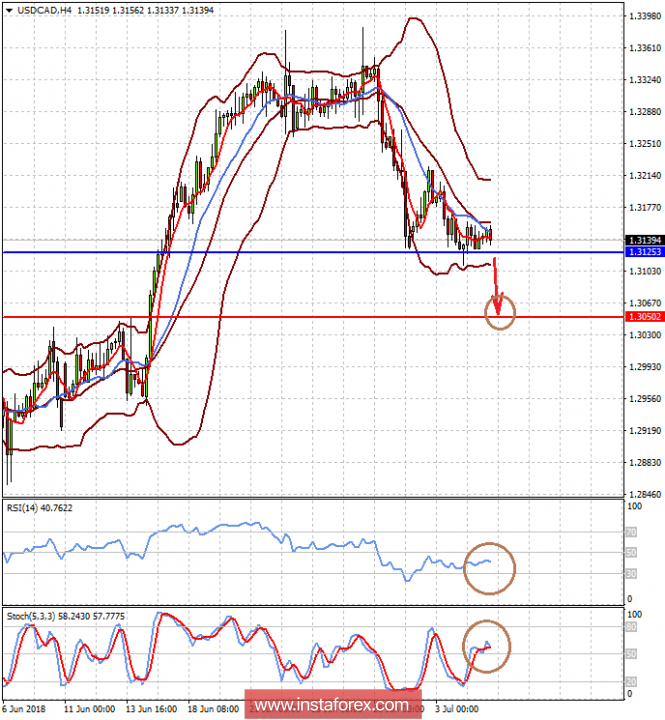