Pound and the euro: such different problems

Contrary to expectations, the ISM business activity index for the US manufacturing sector increased in August from 58.1p to 61.3p, keeping a significant gap from the similar index from Markit. Most experts were guided by the fact that the ISM and PMI Markit indexes will begin to converge, especially since a number of regional offices of the Federal Reserve Bank reported a noticeable decline in production activity last month, which gave grounds for pessimistic forecasts.

Now, players are again at a loss, because the growth of ISM means that Trump’s reforms are gaining momentum and the risks identified in the recent speech of the head of the Federal Reserve Powell are becoming less significant. Forecasts for the dollar change in the bull side, the threat of slowing the growth rate of the Fed rate has become less obvious.

The dollar strengthened at the beginning of the week, as the threat of an escalation of the trade war with China is entering a new orbit. Today, the period of public discussion of yet another package of restrictions on imports from China with a volume of 200 billion is coming to an end, and the likelihood that Trump will immediately announce the introduction of the package is quite high. Markets are preparing for this shock, on Tuesday, stock indexes around the world were traded in the red zone, the dollar is again in demand as a protective currency.

Unlike the US, business activity in the euro area is clearly on the decline, as it is immediately affected by two negative factors. First, the completion of the program of buying back the assets of the ECB and secondly, the threat of a large-scale trade war between the EU and the US.

The PMI index in August remained at the same level of 54.6p, output is at 12-month lows, which usually indicates a reduction in the manufacturing sector as a whole. 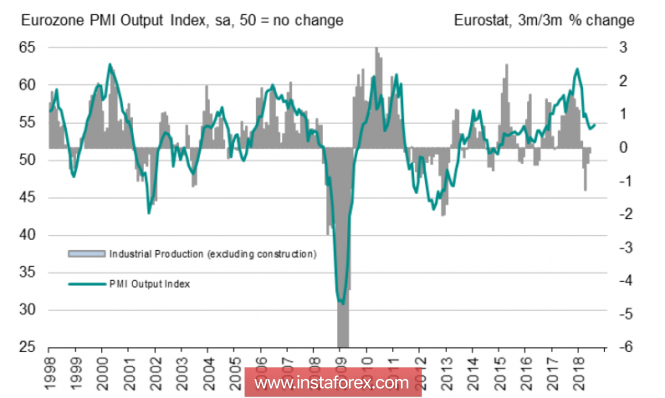 Today, PMI reports will be published in the services sector and retail sales in July, and further the euro will react primarily to external factors, primarily the US labor market report.

September, the last month when the ECB will buy bonds worth 30 billion euros, in October and until the end of the year, the volumes of redemption will slow to 15 billion per month, while purchases are planned in the peripheral countries of the eurozone, such as Finland, Ireland or Portugal, the share of France, Germany and Italy will have significantly less assets. In fact, it is a question of the already refusal to support the three largest economies of the eurozone, which will be reflected in the slowdown in business activity in the euro area as a whole.

The pound started the week with a decline, the immediate cause of which was a rather harsh article in the Telegraph premiere of Theresa May, in which she stated that there were no plans to make any compromises on Brexit if they threatened plans for the country’s development. Britain wants to limit the jurisdiction of the European Court of Justice and withdraw from the customs union, which will untie the government’s hands in concluding its own foreign trade and political agreements without looking back at Brussels. The prospect of being complete without a deal, May does not scare, she said, the absence of a deal is generally better than a deal on bad terms.

The European Union also insists that Britain’s attempt to select from the whole range of agreements only the points that suit it will lead to chaos and is not in the interest of the EU at all since it will provoke a roll of similar demands from other countries.

The political impasse provoked the sale of the pound, but the macroeconomic indicators were not up to par. PMI in the manufacturing sector declined to 52.8p against 53.8p in July, in the construction sector the drop is even more pronounced from 55.8p to 52.9p.

The pound will remain in the next day under pressure, but the rate of decline will slow down. Probably the reduction to support 1.2797, the top pound is limited by resistance 1.2870.