Pound and the euro will continue to decline

The growth of consumer prices in June in the US amounted to 0.2%, this result was 1 point higher than the June value and coincided with the forecasts. Inflation growth at an annualized rate of 2.94%, at first glance, such a trend should be considered positive amid expectations of an increase in the Fed rate at a meeting on September 26. At the moment, the probability of an increase, according to the CME futures market data, is 91%, that is, the markets do not doubt the next step, however, according to inflation expectations, the picture is not so rosy.

Yield of the bonds Tips continues to decline, as of August 9, it fell to April values, and therefore there is every reason to expect that the data for August will be noticeably worse than the July data. 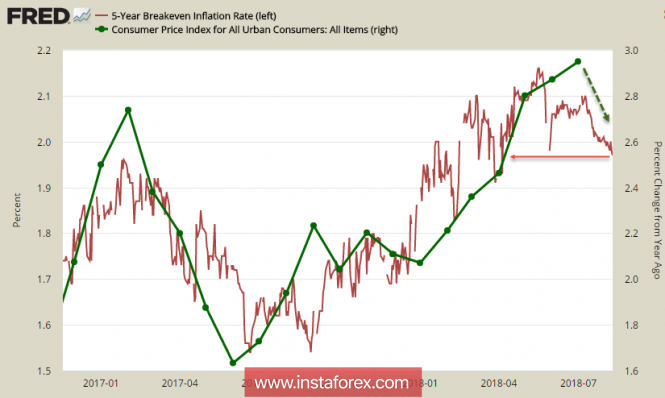 The second alarming parameter is the dynamics of labor remuneration. The growth of the average wage can be considered sufficient only without taking inflation into account, but if we correct the inflation, it will turn out that the average wage has decreased by 0.2% year-on-year, which casts doubt on the budget’s fillability and the success of the entire tax reform as a whole.

The threat of failing on the eve of the congressional elections makes Trump act more aggressively, and the sharp drop in a number of currencies against the dollar by the end of the week is largely political, not economic.

The weekly CFTC report showed that the dollar continues to be the leader of the currency market, and, most likely, will continue to strengthen.

On Tuesday, the index of business optimism from NFIB will be published, on Wednesday an important report on the dynamics of retail sales in July, which could affect inflation expectations.

The sharp decline in the euro on Friday was due to the announcement of the ECB about the growing risks for the euro area associated with the fall of the Turkish lira, since it is the European banks that are the main creditors of the Turkish economy. The problems for the banks provoked conversations that the ECB could extend the asset repurchase program, which was the direct cause of the euro’s decline. Since an immediate refutation by the ECB leadership was not followed, it can be assumed that the regulator does not intend to prevent the euro from weakening.

This conclusion is supported by the general mood of the economic bulletin published last week, in which the ECB expresses concern over the slowdown in world trade. For the first time since 2016, the volume of imports shows a slowdown, export orders noticeably decrease, in these conditions, a decline in the euro for the euro area is a positive factor. 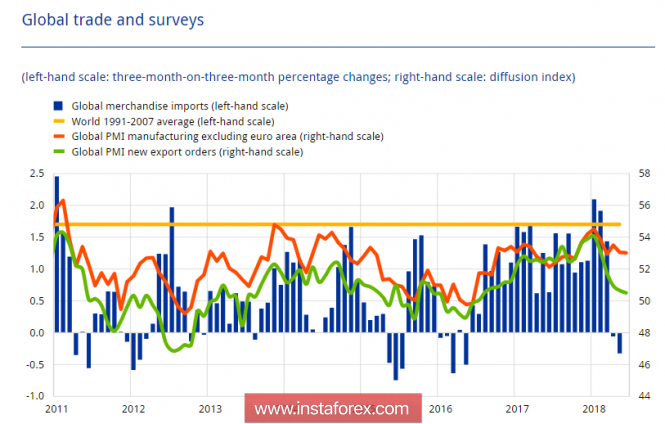 On Tuesday, the second estimate of GDP growth in the euro area in the second quarter, as well as a report on industrial production in June, will be published. There are reasons to believe that it will be worse than the previous one, which will increase pressure on the euro.

Friday for the pound was rich for news. Macroeconomic reports in general looked quite positive – GDP growth in 2 square meters. confirmed at 1.3%, production in June remained stable, the dynamics of the trade balance was unexpectedly positive.

However, a pound of positive news does not help much. Risks of the tough Brexit have risen markedly after comments by Bank of England Governor Mark Carney and Commerce Minister Liam Fox, and the call for a new referendum is also picking up. Such a development of events presents a certain complexity for the Bank of England, as it casts doubt on the progressive completion of a period of soft monetary policy.

On Tuesday, a report on the labor market will be published, on Wednesday, consumer inflation. Even positive news will not help the pound to begin recovery, the GBP / USD rate will remain under the influence of political factors. In the next 24 hours, the pound is likely to fall below 1.27, resistance is supported by the recent support of 1.2917.